From Zelda Dungeon Wiki
Jump to navigation Jump to search
Want an adless experience? Log in or Create an account.
Armogohma 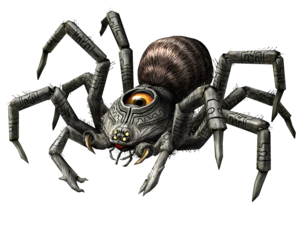 Armogohma is the Boss of the sixth Dungeon in Twilight Princess, the Temple of Time.

The fight against Armogohma has two phases. 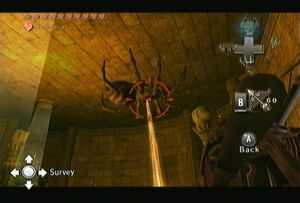 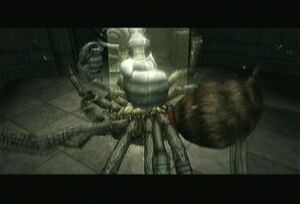 Smashing Armogohma with a statue

If it isn't obvious enough, Armogohma's weak spot is the giant eye that is on its back. Use the bow to shoot an arrow at the eye when it is open and Armogohma will tumble to the floor. Equip the dominion rod and use it on one of the four statues in the corners of the room to activate. Then use the dominion rod once again and the large statue you selected will use its powerful fist to smash Armogohma. The giant spider will then crawl back up the wall and return to the ceiling.

While Armogohma is on the ceiling, you can tell exactly where it is, because it will be covering the hole where light shines in. Armogohma will also lay a bunch of gohma eggs on the floor. These egg gohmas will hatch into small baby gohma and will swarm towards Link. Defeat them all with the various sword techniques and turn your attention back towards Armogohma. Another attack of Armogohma's is to use its eye to create a line of fire. This is pretty easily avoidable and can be blocked with the Hylian Shield. 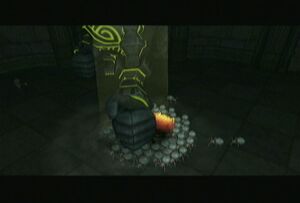 After three fist smashes from the statues, it will appear as if Armogohma has been defeated, but not quite. The remains of Armogohma's eye will still remain and it will be carried around by several hatched baby gohmas. You can slash at the baby gohmas and the eye, but the faster way to defeating the remains of Armogohma is once again with the massive statues. The eye will walk in a counterclockwise pattern around the room. Once it arrives in front of a statue, activate it and smash the eye with one last fist smash and Armogohma will be defeated. After defeating Armogohma, Link will be rewarded with a Heart Container and the third Mirror Shard.