From Zelda Dungeon Wiki
Jump to navigation Jump to search
Want an adless experience? Log in or Create an account.
Potova 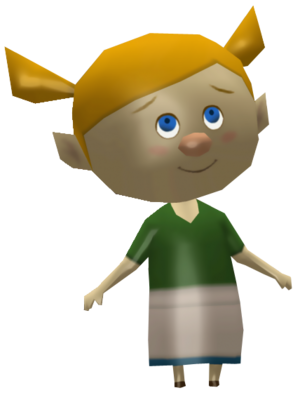 Potava is a character in The Wind Waker that lives on Windfall Island.

She is a small girl that is one of the little girls who spread rumors on Windfall Island along with her friend Joanna. Although Potova will deny spreading rumors and refers to herself and Joanna as good girls.[1][2]

Potova, along with Joanna, are called The Little Tipsters, although they express confusion on what that means, and how they obtained the nickname. They like to stay on Windfall Island, outside the city walls. They claim they won't tell Link any secrets, but if Link gives them each 1 Rupee, they will tell him a secret anyway. They sometimes give Link information regarding the Traveling Merchants, and they also sometimes tell Link of certain pots hidden on Windfall Island. Occasionally, however, they trick Link, and tell him nothing.

Potova attends school at the School of Joy of Windfall Island, which is taught by Mrs. Marie.