From Zelda Dungeon Wiki
Jump to navigation Jump to search
Want an adless experience? Log in or Create an account.
Tingle Tuner 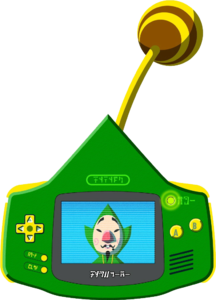 The Tingle Tuner is an item which enables connection to a Game Boy Advance. It is a green device shaped like a Game Boy Advance. In The Wind Waker, Tingle gives the Tingle Tuner to Link as a reward after Link rescues him from the Town Jail on Windfall Island.[1] When activated, this device allows another player to control Tingle, who can help Link with actions or items.

Once the player connects their Game Boy to the GameCube, the GBA screen displays a map of the current area and a mark that shows Tingle's location. An additional player can control Tingle and has a choice of commands, including Tingle Bombs and a number of pay-per-use tools. The Tingle Tuner can also be used to learn about the current area, can help Link find secret Rupees & Fairies, and tells the "The Legend of the Fairy". Link can collect Tingle Statues and complete a side quest to meet Tingle's brother, Knuckle.

In The Wind Waker HD, the Tingle Tuner is replaced by the Tingle Bottle.