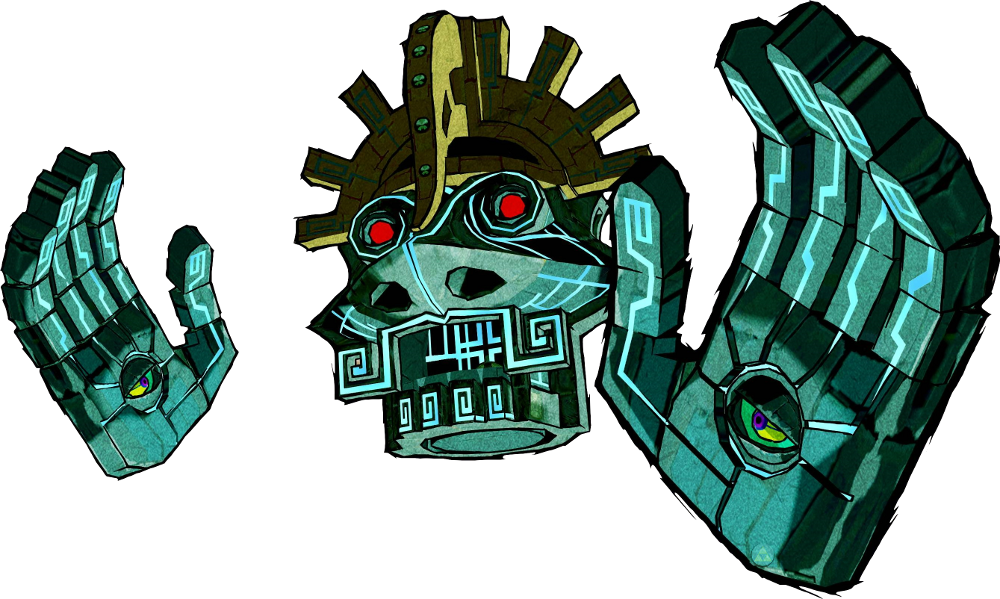 Gohdan is the boss of the Tower of the Gods, the third dungeon in The Wind Waker. It is a large, ancient guardian with a head and two hands. Gohdan was built by the gods to test the chosen hero.

Gohdan and Link as the battle begins

When the battle begins Gohdan will have his eyes on his head closed, but the eyes on his hands will be open. Link can take out the Bow, and use it to shoot two arrows at each eye. After this has been done successfully, both of the eyes on Gohdan's head will open. Link will then need to shoot both of these eyes as well, with two shots going to each eye as well. If Link runs out of arrows, he will sneeze some out for Link to use. After Link has shot both of the eyes on Gohdan's head, Gohdan will fall down with his mouth open. Link can then throw a bomb into Gohdan's open mouth and it will explode. Once this happens, Link will need to repeat the same process to defeat him.

Gohdan has a few attacks that can be dangerous. Link will need to watch out for the fireball attack, where Gohdan will rapidly shoot out a series of fireballs once Gohdan opens his mouth. If he closes his eyes and opens his mouth, run away to avoid the attack. Alternatively, Link can also run under Gohdan before the attack begins, which will stop the fireballs from being shot at all. Gohdan will also get a little faster each time Link successfully attacks him. Gohdan will try more and more to push Link off the edge of the platform and onto the electric floor. The floor will do damage for each second Link is on it so, if he falls, hurry and get back up onto the platform.

After three bombs, Gohdan will open the path forward and tell Link to proceed with caution. A beam of light will shoot down in the middle of the room and Gohdan will return to the wall, sneezing out a Heart Container.