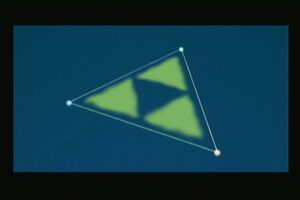 The three Goddess Pearls that summon the Tower of the Gods.

The Triangle Islands are three small but major islands in The Wind Waker. At the beginning of the game, each island has a statue about the size of Link in the middle of it. The King of Red Lions tells Link that each statue needs to have a pearl to help unlock the Tower of the Gods, which will eventually lead Link to Hyrule. All of the islands themselves are actually shaped like triangles, and on Link's map are placed so that lines can be drawn between them forming a triangle.

Eastern Triangle Island is located two blocks north of Forest Haven. It is home to the statue of Farore, and requires Farore's Pearl to be held inside the statue. It is surrounded by Updrafts, proving it a little difficult to get to the island.

Southern Triangle Island is located one block west of the Private Oasis. It is home to Nayru's statue. This is one of the hardest of the Triangle Islands to get to, considering there are Seahats patrolling around and will attack Link when he ventures near it.

Northern Triangle Island is located one square beneath of Windfall Island. It is home to Din's statue and requires Din's Pearl. The island has no defenses to surround it, except for a cyclone if Link hasn't already befriended Cyclos.