From Zelda Dungeon Wiki
Jump to navigation Jump to search
Want an adless experience? Log in or Create an account.
LD-002S Scervo 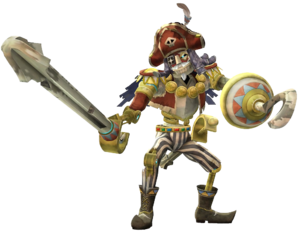 Scervo is the Mini-Boss of the Sandship dungeon in Skyward Sword, being the one who stole Skipper's ship long ago, this skeletal robot pirate is truly a force to be reckoned with. With an electrically charged saber and a pirate hook, Link must truly be careful when battling this robotic menace of the sand sea, as one false move could have him end up in shock.

Many years before the events of the game, Scervo and his terrible crew of pirates seized control of Skipper's ship, and soon afterwards locked the previous crew away within the ship somewhere. Even in the present when Link brings Skipper back to life through the use of the Timeshift Stone, the robot Captain continues to express his fear towards this dreadful Pirate; however he seems reassured that Link could do something about him as the two of them begin to search for his ship. 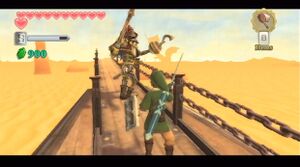 Attacking Scervo with the sword

The whole battle takes place on a narrow platform. Run forward and the battle will begin. Strike at Scervo where its sword and shield are not blocking. Follow-up with consecutive sword slashes to knock Scervo back. You can use straight forward sword jabs to knock him back as they are quite effective. The key is that if Scervo blocks any of your attacks, he'll immediately follow it up with an attack of his own, so take a step back. Alternatively, when Scervo attacks you can deliver a shield bash, stunning Scervo in the process. You can also use the Gust Jar to stop Scervo from moving, and keeping him back near the edge of the platform. Keep hitting Scervo to knock him towards the end of the plank. This will cause Scervo to pull the wooden spike at the end of the platform closer, making the battle space smaller. 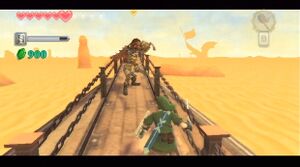 Repeat the same process of slowly but surely knocking Scervo back. During the second phase, Scervo will sometimes attack twice in a row, so be patient. It's important to get successful hits early on, to avoid the spike that is at your back. Keep knocking Scervo back until he's right at the edge.

Scervo will move the spike even closer, but this time he doesn't have a sword. You don't have much room behind you at all, but because he doesn't have a sword, it's easier to land hits. During this phase it's important to be more aggressive. When he is winding up to hit you, deliver a hit before he can do so, and he'll be sent back. You'll need to be more precise with your shield bash in order to knock Scervo back. Keep at it and knock him off the edge.