From Zelda Dungeon Wiki
Jump to navigation Jump to search
Want an adless experience? Log in or Create an account.
Mermaid Statue 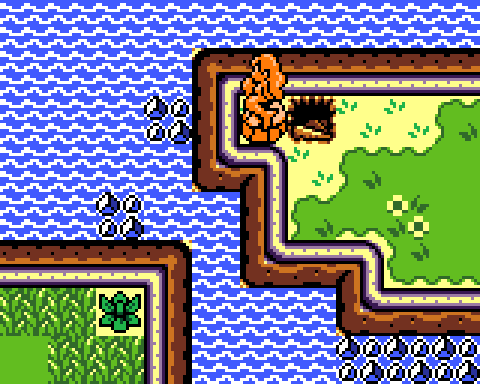 The Mermaid Statue, entitled The Mourning Mermaid by its creator, is a location in Link's Awakening. It can be found in the south of Martha's Bay, one screen below Catfish's Maw. It can be viewed while swimming in the water with the Flippers, but the only way to reach it on land is by going all the way around the bay by foot to a southeastern area with a Buzz Blob and a River Zora. A small pit of water extends across the center of the area, which can be crossed by using the Hookshot to grasp a rock on the other side. The statue is just north from there.

Schule Donavitch explains that he made the Mermaid Statue supposedly to resemble the mermaid who lives in Martha's Bay.[1] However, it was not fully completed due to the lack of one of the Mermaid's Scales.[2] The mermaid herself admits that when the artist asked her to pose, he wanted a scale.[3] Once Link obtains a scale by returning the Mermaid's Necklace to its rightful owner,[4] he can go to the statue and complete the statue with it. The statue then moves aside to reveal a secret passage, which leads to the Magnifying Lens.