Red Ring (The Legend of Zelda)

From Zelda Dungeon Wiki
Jump to navigation Jump to search
Want an adless experience? Log in or Create an account.
Red Ring 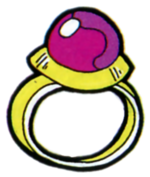 Artwork from the The Legend of Zelda Instruction Booklet

The Red Ring is an obtainable item found in The Legend of Zelda.

The Red Ring is an upgrade to the Blue Ring, and is one of two main items found in Level 9: Death Mountain, with the other being the Silver Arrow. The Red Ring has one use: it cuts down damage dealt to Link by enemies to a quarter compared to his original tolerance.[1] This is shown through a change in Link's tunic. The Red Ring changes his tunic to a brownish-reddish color, compared to the iconic green. This item is very helpful in the last dungeon, as enemies are abundant throughout it. In the Second Quest, the Red Ring is still found in the final dungeon of the game.

"Do you know about the power of the rings? Just now, an old man hidden beneath a statue in the forest found a red ring. You should get it by any means.... Hero, the Evil King is after the Magical Sword and Red Ring. You will not be able to obtain them if the Evil King finds them. Do not let the two pass to his hands. It'd be terrible if he has them!"

The Red Ring is available for only ten minutes during Week 4, between 25 and 35 past the hour, before Ganon takes it to prevent the hero from obtaining it. In MAP1, it is found by burning a the left of a pair of bushes in a clearing, one screen north of Level 3. In MAP2, it is under the left of an Armos pair, one screen west of Level 3.

As in The Legend of Zelda, it turns the hero's tunic red, and redoubles their defence from the Blue Ring.