From Zelda Dungeon Wiki
Jump to navigation Jump to search
Want an adless experience? Log in or Create an account.
Blue Ring 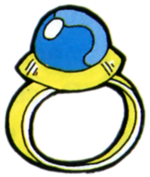 The Blue Ring is a Magical Ring that Link can acquire in The Legend of Zelda and Oracle of Ages, which reduces the damage he takes by half.

The Blue Ring can be bought from a travelling Merchant in one of his secret Item Shops. It costs 250 Rupees, making it the most expensive item in the game. When purchased by Link, this item changes his outfit from green to a light blue color. This altered tunic cuts all damage dealt to Link by enemies in half.[1] This item can be purchased as soon as Link has collected 250 Rupees; no completion of any dungeon is necessary. Furthermore, it is a completely optional item.

Once acquired, Link cannot revert to his green outfit during the playthrough.

While progressing through the Ancient Tomb, Link acquires the dungeon item, the Power Glove. This item allows Link to lift large objects, including the blue Sarcophagus Statues that are found just outside the Ancient Tomb within the Sea of No Return.

At the east end of the Sea of No Return, there is a Sarcophagus Statue that is surrounded by several Blue Darknuts and Blue Lynels. Lift up this statue to reveal a Treasure Chest. Open it up to get a Seed Ring, which turns out to be the Blue Ring.

There is no way to acquire the ring in Oracle of Seasons alone, but it can be acquired by using the Ring Secret in a Linked Game. It functions in exactly the same way as Oracle of Ages if equipped.

The Blue Ring is found in an Item Shop west of the dock to Level 4, and first becomes available after the hero has bought a Blue Candle at the beginning of Week 2. As standard it costs 250 rupees, but the Starting Screen cave Old Man casts a spell on merchants to temporarily reduce the price of all shop items, including the Blue Ring, to half price between 20 and 28 minutes into Week 2.

As in other games, it reduces damage taken by 50% compared to default.