From Zelda Dungeon Wiki
Jump to navigation Jump to search
Want an adless experience? Log in or Create an account.
Stamina Wheel 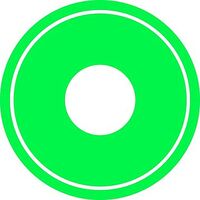 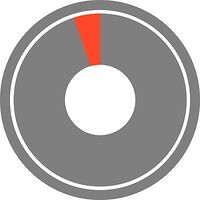 The full and depleted Stamina Wheel statuses in Breath of the Wild; the outer ring represents five Stamina Vessels

The Stamina Wheel, also known as the Stamina Gauge, measures Link's stamina in Skyward Sword and Breath of the Wild. It is depleted by doing strenuous activities such as running, climbing, swimming and pushing boulders.

Link can refill his stamina gauge by running over Stamina Fruits or drinking a Stamina Potion. 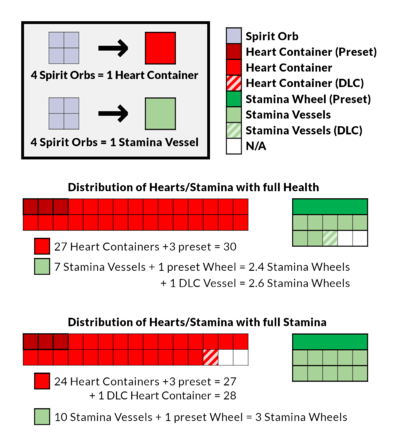 Link can cook "Energizing" Meals and Elixirs to recover different amounts of stamina. There are also "Enduring" Meals and Elixirs that extend the Stamina Wheel with extra, yellow stamina which does not return after being depleted. The green stamina wheel can be increased by 1/5 by exchanging four Spirit Orbs for a Stamina Vessel at a Goddess Statue. A maximum of three full green rings (1 base, 2 extra), plus two yellow rings can be held. This means ten Vessels (from forty Orbs) in total for the extra two green rings. If the player chooses full hearts (30 total, 27 acquired), there will be only enough vessels for 1.4 extra green rings (1.6 with The Champions' Ballad DLC); whereas full stamina will limit the player to a maximum of 27 permanent hearts (28 with DLC). It is not possible through regular means to have both full health and stamina due to the limited allotted containers/vessels given.

Link can exchange between Stamina Vessels and Heart Containers at the Horned Statue in Hateno Village at a total cost of 20 rupees, after the statue pays 100 rupees to take a vessel and charges 120 rupees to give it back. The first exchange does not cost rupees, but every exchange henceforth comes at a charge.

Temporary Stamina (yellow rings) can be gained by sleeping in improved beds at select locations (like the Hotel Oasis at Gerudo Town), or by consuming stamina-replenishing meals with extra stamina effects.

The stamina wheel's effects depend on different circumstances. Complete depletion of the wheel will cause Link's actions to cease momentarily in different ways depending on the given activity:

The wheel depletes at different rates also depending on Link's actions. Bounding while climbing a wall or swimming will deplete the wheel faster, but Link will cover the distance at a shorter time.

There are places in Hyrule where not even 3 stamina wheels are enough to scale, like the deepest parts of Tanagar Canyon, and there are water-bound locations that cannot be reached by solely swimming, like Eventide Island, requiring stamina-replenishing meals and elixirs to do so.

Mostly related to paragliding, Link's Stamina Wheel will replenish itself automatically if he's inside a heavy updraft and falls momentarily, like at the Flight Range and during the aerial attack against the Divine Beast Vah Medoh.

Aside from stamina-replenishing meals and elixirs, the wheel's depletion can be ameliorated through different ways, like using the Climber Set or the Zora Set for faster climbing and swimming respectively, or by consuming speed-enhancing meals and elixirs. There are also armors that reduce the stamina consumption of stamina-depleting attacks related to the Master Sword.

Link is only susceptible to temporary fatigue, so sleeping has no effect in stamina replenishing other than places where paying for special beds awards temporary stamina wheels. Free beds also have no extra effects on stamina.