From Zelda Dungeon Wiki
Jump to navigation Jump to search
Want an adless experience? Log in or Create an account.
Ancient Set 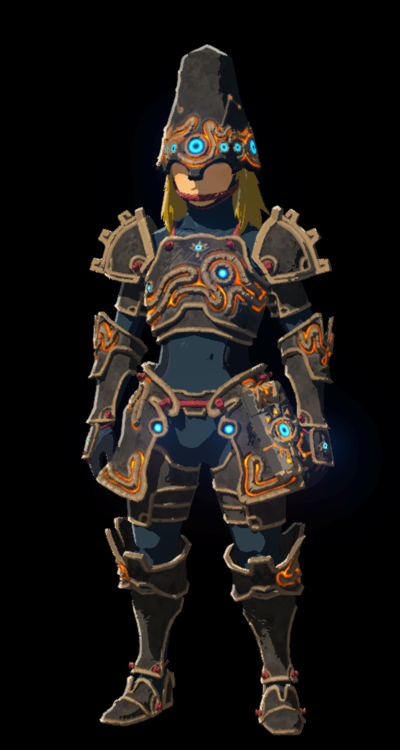 Each of the pieces in the set can be bought from Cherry for 2000 Rupees, 20 Ancient Gears, 5 Ancient Springs and 3 Ancient Cores. Each piece contributes 1/3 towards Guardian Resist Up. It also provides Ancient Proficiency, increasing damage with ancient and guardian weapons by 80% when the set is collectively upgraded above ★★; this bonus does not apply to the Master Sword.

The four Champion amiibo can each be scanned to randomly produce ancient head-pieces corresponding to their Divine Beast. Each of the helms can replace the Ancient Helm to provide Ancient Proficiency bonuses (when upgraded) at the cost of Guardian Resist Up. They each provide other extra bonuses related to the Divine Beast they represent.

All helms follow the same upgrade parts path as the rest of the set.

The items in this set can be upgraded by a Great Fairy Fountain and cost Monster Parts to upgrade. Enhancing items requires that you have unlocked as many fountains as the desired star-level. Upgrading each least twice gains 1/3 towards the Ancient Proficiency bonus which increase the damage dealt against Guardians and increases damage from all ancient weapons by 80%.

The collective strength of the armor sums up to 84, which is among the highest in the base game alongside the Hero of the Wild Set and the Soldier's Set, but the latter of the two offers no bonuses.

The items in this set can be dyed at Kochi Dye Shop in Hateno Village, though only the under armor tights get dyed.