From Zelda Dungeon Wiki
Jump to navigation Jump to search
Want an adless experience? Log in or Create an account.
Cherry 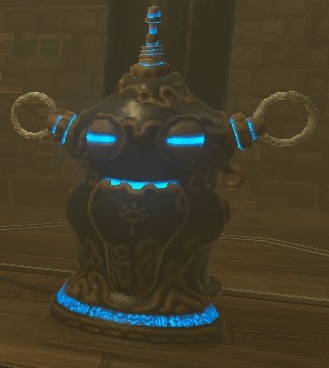 Cherry at the Akkala Tech Lab

In Breath of the Wild, Cherry is the name given by Robbie to a robot that was created from a Guidance Stone.[1] Robbie officially refers to it as the Ancient Oven.

The namesake of Cherry is a young Sheikah girl of similar name with whom Robbie grew affectionate for 100 years ago. At the time she was about 10, but Robbie himself was no older than 20; this age gap isn't as large as in his marriage. It is found within the Akkala Ancient Tech Lab in northeastern province of Akkala. When Link lights the furnace adjacent to the lab with a Blue Flame, Cherry is reactivated and is capable of producing a variety of ancient soldier gear for Link when provided with the necessary ancient materials — and at Robbie's insistence, a donation for the lab's research.[2] Robbie will reward Link with three Ancient Arrows for reactivating Cherry.

As the weapons are standardized copies, they carry no inherent defensive, attack, durability or reach bonuses. However, they are susceptible to the attack bonuses associated to the Ancient Set.