Breath of the Wild Amiibo

There are fifteen amiibo that give specific bonus items in Breath of the Wild, some items that can be acquired normally in the game, but some are weapons & armor which are only accessible by the amiibo. However, any other amiibo can be used with the game and will provide random items.

Before amiibo can be used, Link must first acquire the Paraglider and leave the Great Plateau. Once this is done, the option to enable amiibo will be available in the system menu.

After turning on amiibo in the system menu, a new amiibo Rune will be in the rune menu, all the way to the right. Use this rune and target an open spot on the ground. This preps the game to receive an amiibo. Tap the amiibo figure to the controller as usual to activate the amiibo.

amiibo can only be used once per real-life day. This seems to reset at midnight based on the time settings on the console.

All amiibo will work with Breath of the Wild, even ones that are not related to the Zelda series. However, non-Zelda amiibo will simply give random items and have no specific exclusives.

Many of the Zelda-series amiibo have a chance to give exclusive items in addition to their first-time use bonus. It is therefore worth it to use them daily until these exclusive items are collected, if desired.

Potential Chest Items: A chance of one of the three pieces of the Hero of Time Set (Cap of Time, Tunic of Time, Trousers of Time), Biggoron's Sword, assorted weapons

Potential Chest Items: A chance of one of the three pieces of the Hero of Winds Set (Cap of the Wind, Tunic of the Wind, Trousers of the Wind), Sea-Breeze Boomerang, assorted weapons, elemental arrows

Chest Items: One time summon of Epona (the only way she can be obtained in the game, register immediately), a chance of one of the three pieces of the Hero of Twilight Set (Cap of Twilight, Tunic of Twilight, Trousers of Twilight), potentially any of an assortment of swords, shields, and elemental arrows

Wolf Link will appear in Breath of the Wild as a companion with the stats that were saved to the amiibo on completion of the Twilight Princess HD Cave of Shadows. He will attack enemies on his own and help Link find hidden items.

Non-Chest Items: Barrels that are either explosive or contain rupees and arrows

Three Link-themed amiibo were revealed during the Nintendo Direct on April 12th, 2017. They were released for the first time on June 23rd, 2017, and allow the player access to more exclusive items.

Potential Chest Items: A chance of one of the three pieces of the Hero of Twilight Set (Cap of Twilight, Tunic of Twilight, Trousers of Twilight), the exclusive horse Epona, assorted weapons & shields, elemental arrows

Potential Chest Items: A chance of one of the three pieces of the Hero of the Sky Set (Cap of the Sky, Tunic of the Sky, Trousers of the Sky), Goddess Sword, assorted weapons & shields, elemental arrows

Four additional amiibo were announced during Nintendo's E3 presentation on June 13th, 2017. They were released for the first time on November 10th, 2017, and allow the player access to even more exclusive items. It's required for the player to have cleared at least one of the Divine Beasts to obtain the exclusive items in these amiibo.

Non-Chest Items: An assortment of gemstones.

Non-Chest Items: An assortment of fish.

Non-Chest Items: An assortment of fruits, bundles of arrows. 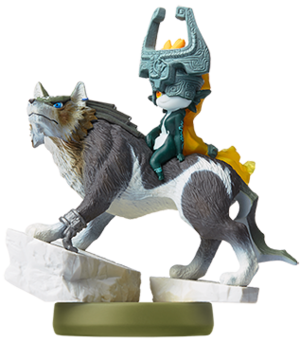 Wolf Link is an exception to all other amiibo. Activating the Wolf Link amiibo will summon Wolf Link as a companion. The following are points of information that relate only to Wolf Link: