From Zelda Dungeon Wiki
Jump to navigation Jump to search
Want an adless experience? Log in or Create an account.
Boldon 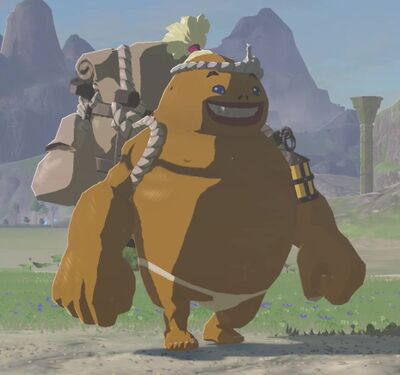 Boldon is a character from Breath of the Wild.

Boldon is a Goron travelers who can be seen walking along the path between the Foothill Stable and the Woodland Stable.[1] He claims himself to be an ambassador of tourism for Goron City. He thinks that Goron City is great and everybody should visit it at least once in their lives. Although he does acknowledge that like all great cities, Goron City does have its fair share of problems.[2]

Boldon mentions how hot it gets at Goron City, saying that it could burn you to a crisp. He encourages Link to stock up on some Fireproof Lizards, so that he can make a Fireproof Elixir to withstand the heat.[3][4][5] This will work to withstand the heat as an alternative to any fire-resistant clothing. However, Boldon has forgotten what materials are needed in order to make an elixir, only remembering that it requires a fireproof lizard.[6]

Boldon encourages Link to visit the Goron Hot Springs, found just south of Goron City.[7] However, he mentions that fewer people have been visiting the springs lately, and Boldon thinks this is because the Divine Beast Vah Rudania.[8] Despite being an ambassador to Goron City, Boldon does acknowledge that the roads leading to Breath of the Wild, as well as to Hyrule Castle can be rather dangerous.[9]

If at any point of his journey, Boldon comes under attack, he will start huffing and puffing.[10][11] After Link defeats any of the nearby enemies, Boldon will reward him with a meal.[12][13]