From Zelda Dungeon Wiki
Jump to navigation Jump to search
Want an adless experience? Log in or Create an account.
Gekko 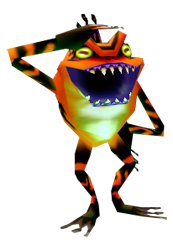 Gekko is a mini-boss from the Woodfall Temple and the Great Bay Temple in Majora's Mask. Despite their name, these enemies are frog-like orange, which is partly because they are both frogs from the Frog Choir who were cursed by evil from the temples they are found in.

The Gekko in this temple is not alone. It rides on the top of a Snapper and must be knocked off the back of the Snapper to be weakened. Once the Gekko is off the Snapper, Link must hit it with an Arrow as it is running around the room to hurt it. This process must be repeated until the Gekko is defeated.

The Gekko in this temple is also aided by another enemy, Mad Jelly. When Link first enters the room, the Gekko will drop Mad Jelly from the ceiling. He walks around in the jelly, once in a while picking one up and throwing it at Link. After the Gekko is damaged, it collects all the Mad Jelly into one glob and surrounds himself with it on the ceiling. If the Gekko drops the jelly ball on to Link, he will become stuck and the Gekko will begin to punch him until he is out of the jelly. Link must freeze the jelly mass with an Ice Arrow, causing the Gekko to crash to the floor with the Gekko vulnerable. The Gekko will pick itself up and begin throwing the Mad Jelly at Link again, starting from the beginning. If Link continues to hurt the Gekko then freeze the jelly blob, he will eventually defeat the Gekko and be rewarded with the Boss Key.