From Zelda Dungeon Wiki
Jump to navigation Jump to search
Want an adless experience? Log in or Create an account.
Twinmold 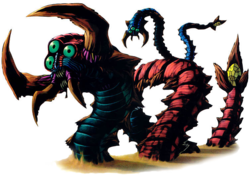 Giant Masked Insect: Twinmold, more simply referred to as Twinmold, is the Boss of Stone Tower Temple, the fourth Dungeon in Majora's Mask. This foe presents something of a challenge for Link, as it is not the size of an ordinary boss. Twinmold is also split into two equally powerful worms that protrude from and dive into the sand randomly. The Giant's Mask that was previously obtained in the Stone Tower Temple relies on the Magic Meter, but augments Link's size, therefore allowing him to fight Twinmold more easily.

The weak points of the twin monsters are the heads and tails. Whenever Twinmold dives into the sand or starts to arise from it, the head and tail of either of the worms are vulnerable to sword strikes. The battle consists of simply slashing at Twinmold's weak points until both are dead, as they ignore Link throughout the entire battle and damage taken by Link is usually due to poor placement or getting in a bit too close while trying to attack. Link can also shoot Arrows at each of the monster's tails. One worm falls before the other, so once one of the two has fallen, Link can focus his attention on the remaining twin.

This battle is the only time that Link can use the Giant's Mask in the game. Chateau Romani is highly suggested here, or at least the extended Magic Meter, for the Giant's Mask depletes magic extremely quickly. Otherwise, if Link runs low on magic, he has to slash the pillars around the arena to recover magic. Link has to turn small again to gather the magic, making him susceptible to more attacks and to sinking in quicksand. Either way, the battle itself is not too difficult as detailed previously.

Twinmold is probably the most painstaking of the bosses to defeat using the Fierce Deity's Mask. Since the Giant's Mask was the intended instrument of its destruction, remaining relatively the same size won't exactly make the battle easy. Because Link is not huge, Twinmold poses a much greater threat as it is perhaps the largest Zelda boss in history. The tails and heads of the worms are still its weaknesses, though the limited range of the Sword Beams and the incredible speed of the two worms make it frustrating to actually get up close and strike the tails and heads. Sword Beams aren't very effective here. It is easier to just allow the worms to tunnel into the sand. The tails are only in Link's target range for a split second, so it is important for Link to take the initiative and strike swiftly. After battling Twinmold as Fierce Deity Link, players likely won't want to do it again.