From Zelda Dungeon Wiki
Jump to navigation Jump to search
Want an adless experience? Log in or Create an account.
Majora's Wrath 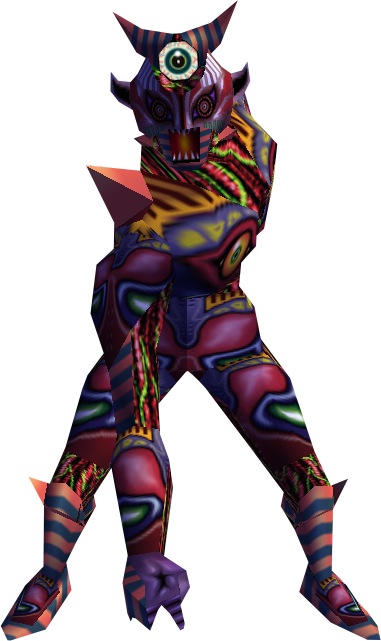 Majora's Wrath is the third and final form of the final boss battle with Majora's Mask in the game Majora's Mask. He gains a greater evil look and has a slightly lower pitch than his second form.

This is considered by many to be the toughest form of the three.

Majora's Wrath comes equipped with two tentacle-like whips that attack quickly and sometimes without pause. The best strategy overall would be to stay away.

It is also possible to run up and slash him normally, but his attacks will sometimes go over or go around Link's shield if he is too close, or he may jump out of the way or kick Link. If Link is out of arrows and has used the ones in the pots scattered around the room, don't panic and try to get close.

After taking quite a bit of damage, Majora's Wrath starts creating spiky, spinning tops that home in on Link. They can be quite hard to avoid and they can easily attack from behind. When they stop spinning, they fall over and explode.

The best thing to do is to shield, Z-target him, and circle along the wall getting as close to him as possible. This will keep Link fairly safe from the exploding tops. Shoot him with arrows and slash away. He'll die soon after.