From Zelda Dungeon Wiki
Jump to navigation Jump to search
Want an adless experience? Log in or Create an account.
Wart 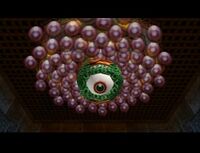 Wart appears to be a giant eye-ball of a land-sea creature. Wart's eye has bloodshot around it and the eyelid consists of a green mossy substance. Wart is also covered in pink bubbles that Link must destroy to deal damage to it. It is also very large, about three times the height of Link. Link should wait to attack Wart's eye the moment it opens; however, destroying all the pink bubbles makes it far easier to strike its eye when it opens. Deku Nuts are effective in removing the eyes or even striking its main eye. Also, Bombs or the Blast Mask remain effective in removing the bubbles from it or directly attacking its big white eye. Arrows of any sort work as well, and lastly, Link's Sword takes out the bubbles or strikes its eyes directly. Although, once it is damaged enough, it will start charging around the room regardless of the state of the pink bubbles. The majority of them may be around if Link strikes its eyes enough times before the second phase when it charges around.