From Zelda Dungeon Wiki
Jump to navigation Jump to search
Want an adless experience? Log in or Create an account.
Gyorg 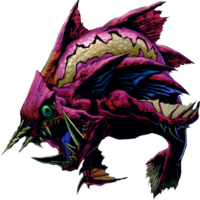 Gargantuan Masked Fish: Gyorg is the Boss of Great Bay Temple, the third Dungeon in Majora's Mask. A vicious and ferocious fish, Gyorg is one of the toughest bosses in the game. The battle takes place on a round platform surrounded with water. Link starts out in the center of the platform, but Gyorg can easily knock him off by ramming into the side. In the water, Link has a huge disadvantage. Gyorg is very agile, and eats and spits out Link if he gets the chance to. When Link is on the platform, Gyorg sometimes jumps over the top in an attempt to knock him over and cause damage. Link must first shoot Arrows into the water to stun Gyorg. Also the Zora's boomerang can be used to aid in stunning the fish. Once the fish is immobilized, Link has the chance to don the Zora Mask and jump into the water to use the magic barrier in order to harm it. Rinsing and repeating the process results in Link besting Gyorg and grabbing Gyorg's Remains, plus a Heart Container.

Gyorg, like Goht, moves around a lot, but its territory is the water, not a racetrack. Likewise, Fierce Deity Link finds some challenge in defeating Gyorg, even as the formidable Fierce Deity. Gyorg occasionally flips out of the water and tries to knock Link into the water, and in these instances, just climb back on to the platform. Instead of using a combination of Arrows and the Zora magic barrier to harm the fish, Fierce Deity Link has the luxury of simply firing Sword Beams at the expense of Magic Power. Several beams won't seem to hurt Gyorg as they don't travel quickly enough to hit it while it is moving. It is best to strike from the platform while Gyorg is still.