The Legend of Zelda: Ocarina of Time (Manga)

From Zelda Dungeon Wiki
Jump to navigation Jump to search
Want an adless experience? Log in or Create an account.
The Legend of Zelda: Ocarina of Time (Manga) 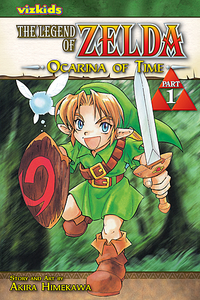 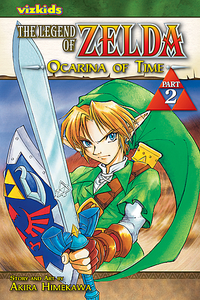 This is the official manga for Ocarina of Time. It was written and illustrated by Akira Himekawa, the same artist who made many of the other Zelda mangas. It is in black and white with some pretty nicely illustrated drawings. It is divided into two volumes; with ten chapters in the first volume, and five in the second volume. The chapters in this manga are divided into two parts called the "Child Saga" and the "Adult Saga". The plot in the manga follows the exact plot of the game, but with a few differences. There are three bonus chapters added at the end of volume two.

This first volume of this manga was released in Japan on January 28, 2000, and the second volume was released on April 26, 2000. The series was published in English in 2008 by Viz Media as Volumes 1 and 2 of their Zelda comic series.

In the mystical land of Hyrule, three spiritual stones hold the key to the Triforce, and whoever holds them will control the world. A boy named Link sets out on a quest to deliver the Emerald, the spiritual stone of the forest, to Zelda, Princess of the land of Hyrule. The journey will be long and perilous, and Link will need all his skill and courage to defeat evil. The battle for Hyrule and the Sacred Realm has begun!

After completing his training Link begins his journey to find the remaining Sages. Meanwhile, Ganondorf continues looking for Princess Zelda and plotting to capture Link with the aid of the witches known as Twinrova. At the urging of the mysterious Sheik, Link enters the Haunted Wasteland to find Zelda. The journey will be dangerous, but Link is determined to overcome Twinrova's traps and survive to face Ganondorf in an epic final battle!

-- Link is given the Kokiri Sword by Mido rather than finding it himself in the Kokiri Forest.
-- Link makes the Slingshot rather than finding it inside the Great Deku Tree.
-- Malon is not in Castle Town, but instead, is replaced by Princess Zelda.
-- Link first encounters Impa in Hyrule Castle Market instead of the Hyrule Castle courtyard.
-- Ganondorf encounters Link and Zelda in the castle courtyard.
-- In the manga, King Zora gives Link the Boomerang, rather than Link finding it in Inside Jabu-Jabu's Belly.
-- Link has a pet dragon, which later becomes Volvagia.
-- Link defeats Volvagia with the Fairy Bow rather than the Megaton Hammer.
-- Link never enters the Shadow Temple.
-- Instead of encountering Bongo Bongo, Link fights Dark Link who emerges from the well.
-- Nabooru gives Link the Mirror Shield.
-- Link battles alongside others within certain dungeons.
-- Link trains with Impa as an adult.
-- Many characters show up in different places than they do in the game.
-- Zelda is revealed as Sheik earlier in the Manga.
-- Ingo was brainwashed by Koume and Kotake and held Malon captive to kill Link.
-- Several bosses talk in the Manga. Only Twinrova and Ganon talk in the game.
-- Navi explains her reason for leaving Link at the end of the game.
-- Link and Zelda are more romantically linked in the Manga.
-- There is an extra story about young Link meeting with the Skull Kid in the Lost Woods at the end of volume two.
-- There is a new race called Watarara introduced in an extra chapter at the end of volume two.