The Legend of Zelda: Ocarina of Time (Comic)

From Zelda Dungeon Wiki
Jump to navigation Jump to search
The Legend of Zelda: Ocarina of Time (Comic) 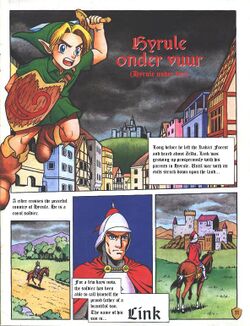 This comic was published in a special edition of the European Club Nintendo magazine in 1998. It was published first in Germany, and then translated to Dutch when released in the Netherlands. Comic Art was done by Work House Co. Ltd. in Tokyo.[1]

This comics provide the background story to Ocarina of Time. Chapter one talks about the Great War between the races of Hyrule and the death of Link's father. Chapter two talks about Link's Mother escape to the Kokiri Forest with Link, and why she abandoned him.[2]