The Legend of Zelda: A Link to the Past (Akira Himekawa) Manga

From Zelda Dungeon Wiki
Jump to navigation Jump to search
Want an adless experience? Log in or Create an account.
The Legend of Zelda: A Link to the Past (Akira Himekawa) Manga 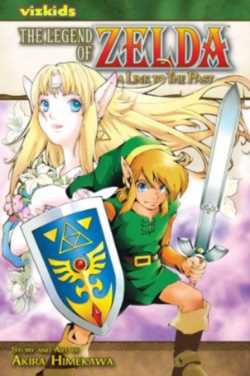 This is the official manga for A Link to the Past. It is written and illustrated by Akira Himekawa, the same artist who made many of the other Zelda mangas. It shares the same qualities as many of the other Akira Himekawa Manga, as it is nicely illustrated and in black and white. There are some pretty notable differences between the game and the Manga and they are listed below.

A terrible tragedy befalls Link's family and friends when the traitorous Agahnim launches a plot to seize the Triforce and unleash a terrible evil on the world. To bring justice to Agahnim, Link needs the Master Sword and sets off on a quest to find it. Link's journey may also help him discover what happened to his parents, and while Agahnim's minions and traps are dangerous, this link to the past may be even more challenging!

-- Agahnim is revealed as a friend of Link's father.
-- Agahnim sends one of his friends and his wife into the Dark World.
-- Link's Uncle dies
-- There is a new character exclusive to the manga, Ganti.
-- Most bosses have different appearances