The Legend of Zelda: A Link to the Past (Ataru Cagiva) Manga

From Zelda Dungeon Wiki
Jump to navigation Jump to search
Want an adless experience? Log in or Create an account.
The Legend of Zelda: A Link to the Past (Ataru Cagiva) Manga 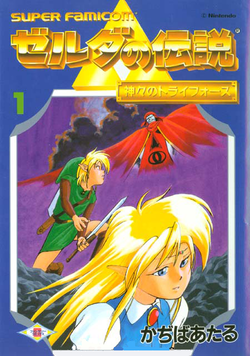 The cover of the first volume

The Legend of Zelda: A Link to the Past manga is a manga made by Ataru Cagiva, the same person who made the Link's Awakening Manga. The manga loosely based on the story of A Link to the Past, and greatly expands on the story told in game. This manga was serialized in Monthly GFantasy, and it was later collected into three volumes by Enix Corporation. This manga was actually made after Ataru Cagiva finished the Link's Awakening manga.

At the beginning of A Link to the Past, a young boy named Link is awakened by a telepathic message from Princess Zelda, who says that she is locked in the dungeon of Hyrule Castle. As the message closes, Link finds his uncle ready for battle, telling Link to remain in bed. However, Link ignores his uncle's command, and after his uncle leaves, follows him to Hyrule Castle. When he arrives, he finds his uncle seriously wounded. Link's uncle tells Link to rescue Princess Zelda from her prison, giving him a sword and shield. Link navigates the castle and rescues Zelda from her cell, and the two escape into a secret passage through the sewers that leads to a sanctuary.[1]