The Legend of Zelda: Four Swords Plus (Manga)

From Zelda Dungeon Wiki
Jump to navigation Jump to search
Want an adless experience? Log in or Create an account.
The Legend of Zelda: Four Swords Plus (Manga) 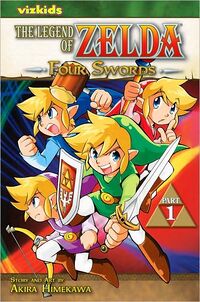 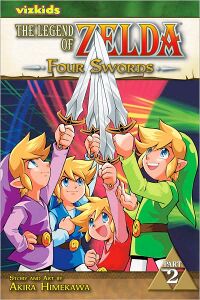 The Legend of Zelda: Four Swords Plus is the official manga for Four Swords Adventures. It is written and illustrated by Akira Himekawa, the same artist who made many of the other Zelda mangas. It is in black and white with some pretty nicely illustrated drawings. It is divided into two volumes and 12 chapters. The plot in manga more or less follows the storyline from the game. There are, however, some notable differences from the game and they are shown below. The Omake is an added bonus that was included in the second volume.

This first volume of this manga was released in Japan on September 28, 2004, and the second volume was released on May 27, 2005. The series was published in English in 2009 by Viz Media in North America as Volumes 6 and 7, respectively.

Link, now a Hylian Knight, serves Princess Zelda at Hyrule Castle. When Shadow Link kidnaps Princess Zelda, Link once again must prepare himself to defeat the forces of evil. To do so, he needs the legendary Four Sword, but getting it means releasing and then battling the ancient evil power Vaati. The Four Sword also splits Link into four different versions of himself, and these new Links aren't team players! Rescuing Zelda, beating Vaati, and getting his wild alter-egos under control isn't going to be easy!

The Green, Red and Blue Links reach Death Mountain, where they challenge Shadow Link and Violet Link in battle. Then, inside the Fire Temple they learn a terrible secret about the Dark World and the evil power behind Vaati. To defeat this great enemy, the different colored Links must find a way to become one again in order to harness the power of the Four Sword!