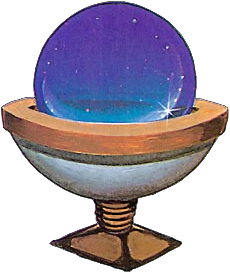 Artwork of a Crystal Switch from A Link to the Past

The Crystal Switch makes its debut in A Link to the Past. These switches are similar in appearance to a crystal ball. Crystal Switches control how the color-matched block obstacles in the dungeon floors move. When it is red, the red blocks fall down and a pathway is revealed. When it turns blue, the blue blocks fall into square holes in the floor. This allows Link to walk forward across them. 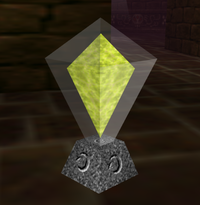 "I'll tell you a secret for saving me! There are switches in this temple that you have to cut to activate. But, you can also use the Goron "special crop" to do the job.[1]"

— A Goron from the Fire Temple

In Ocarina of Time, Crystal Switches appear as diamond-shaped crystals with an inner crystal inside it which goes from white to yellow when activated. Items like the Hookshot, Bombs, Sword, and many others can activate them. The switches aid in events such as temporarily dousing fire or changing water levels.

In The Wind Waker, the Crystal Switches are white in color and diamond in shape. When hit with certain weapons, such as the Hookshot, Hero's Bow, and others, it turns yellow in color. These are very similar to the switches found in Ocarina of Time.

In Skyward Sword, Crystal Switches are a light purple and in the shape of a diamond made up of six other smaller diamonds. When hit, the diamonds turns gray, spins around and separates from each other and then stops and stays floating in the air as individual diamonds. Weapons such as the Sword, the Beetle (Item), the Slingshot, the Bow, Bombs and all of their different upgraded versions, can be used to activate these switches.

The Crystal Switches in A Link Between Worlds are identical to those in A Link to the Past. Some puzzles require Link to stand on the pillars controlled by the switches to raise him up, allowing him to reach higher platforms.