From Zelda Dungeon Wiki
Jump to navigation Jump to search
Want an adless experience? Log in or Create an account.
Ice Ruins 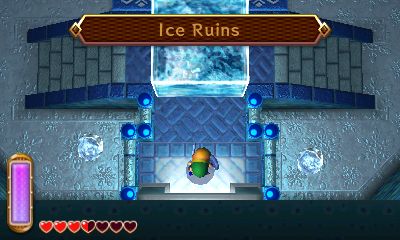 The Ice Ruins, alternatively known as the Ice Palace, is a dungeon in A Link Between Worlds. It is located in the Lorulean version of Hyrule's Death Mountain. Unlike its Hyrulean counterpart, it is covered in ice and snow. To reach the Ice Ruins, Link has to travel through the innards of Death Mountain in Hyrule and cross through a Fissure. In order to enter them, Link needs to melt the ice on the outside with the Fire Rod. Link will need to travel through the dungeon in order to obtain Rosso's Painting.

The Ice Ruins is one of the more difficult dungeons to reach in the game, as it is highly inaccessible from the normal flatlands of Lorule.

To reach it, Link can use the Bell to have Irene's broom take him to the Tower of Hera's weather vane, then use the Hookshot to cross the bridge to the east. He can then use Rosso's Ore Mine to head further down the mountain where he will find a Fissure leading him into Lorule's Death Mountain.

After finding the Fissure, Link will soon reach a giant ice cavern that will lead him back up the mountain. Once reaching the top of the mountain, Link will find the entrance to the Ice Ruins closed by a large block of ice. He can then use the Fire Rod to melt it and finally enter the dungeon.

The Ice Ruins are shaped much like a small platform hanging over a large dormant volcano. There are several floors that are largely disconnected, and many parts of each floor are only accessible after completing objectives on other floors, such as stepping on certain switches. There is however a moving block system that connects parts of every floor.

Much like the giant ice cave Link traversed to reach the dungeon, many platforms in dungeons consist of small ice walkways. These walkways are often disconnected and are only connected after reaching certain areas of the dungeon. The dungeon also contains many areas of the floor that will move away once a certain switch is stepped on, allowing Link to reach lower areas.

One of the main threats in the dungeon is not the enemies themselves, but rather it is falling off the platforms to the volcano below. Many of the platforms are small and slippery, making death from falling much more realistic than the normal death from enemies.

The Stamina Scroll can be found here and serves as the dungeon's item.

These are the enemies encountered in the Ice Ruins.

The Mini-Boss of this dungeon is a Giant Pengator. As its name implies, this is a much larger and more difficult Pengator surrounded by regular Pengators. This battle can be difficult due to the limited space and the icy floor. The sword can be used to defeat it, but the Fire Rod is much more effective.

The Boss of this dungeon is Dharkstare. This strange boss is initially surrounded by a large block of ice that Link needs to melt with the Fire Rod. Once this protection is gone, Link can use either the sword or the Fire Rod to damage the boss itself.

To attack, the boss will throw balls of ice onto the platform which will form large triangles that will soon freeze Link and damage him. This attack can be very difficult to avoid, due to its large radius and the small platform.