From Zelda Dungeon Wiki
Jump to navigation Jump to search
Want an adless experience? Log in or Create an account.
Irene's Broom 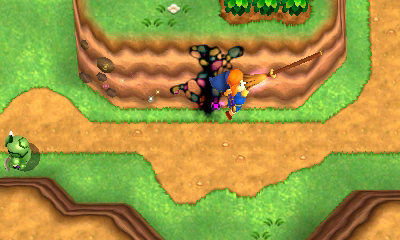 Irene's Broom is an animate object that appears within A Link Between Worlds. Irene is first met riding it, and she uses it to transport Link to the various Weather Vanes found throughout Hyrule and Lorule.

After Irene has been captured by Yuga, Link can still use the Bell to call for a ride. While Irene herself won't appear, her broom will still appear with no rider. The broom doesn't say anything, and the text that appears is '...'. However, it still functions in exactly the same way with or without Irene.

After Link has completed the Desert Palace and saved Irene, she will appear at the Chamber of Sages. With her trapped there, the broom will still appear alone with no rider when summoned with the bell. However, when Link summons it with the Bell, Irene can speak to Link through it.

Irene occasionally complains half-heartedly about Link wearing out her broom, and says that he will have to buy her a new one, or else she won't be able to give him more rides.