From Zelda Dungeon Wiki
Jump to navigation Jump to search
Want an adless experience? Log in or Create an account.
Gage 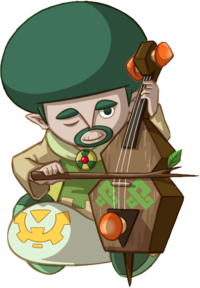 Gage is the Lokomo of the Forest Realm in Spirit Tracks. Once the Lokomo Song has been played, a path to the Forest Temple is revealed. Gage plays the Cello during the duet with Link.