From Zelda Dungeon Wiki
Jump to navigation Jump to search
Want an adless experience? Log in or Create an account.
Puppet Ganon 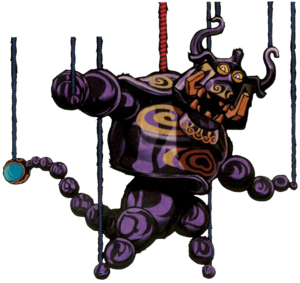 Puppet Ganon is a Boss of Ganon's Tower, the last dungeon in The Wind Waker. It is fought just before the final clash against Ganondorf. This colossal marionette proves to be quite the challenge before the last boss is encountered in the game. When Link fights Puppet Ganon the battle shifts through three phases, each one with this monstrosity taking on a new form.

Before the battle begins, a scene will play where Link and Ganondorf discuss Zelda's dreams. Ganondorf comments about how what the King had said was all ridiculous, and instead that it was their gods who destroyed them. Ganondorf also states that he was waiting for Link to arrive, whom he tells to not betray his expectations. Ganondorf begins to deform until the curtains reveal that standing before Link now was none other than Puppet Ganon.

Link and Puppet Ganon about to face off

For each of the three phases of Puppet Ganon, Link will need to use Light Arrows to hit the ball located on their tails. For the first phase, Link can pull out the Boomerang and use it to cut some of the puppet's strings. Most importantly, Link will want to cut the one holding up the puppet's tail. Each string takes a couple of hits to take down, so make sure to target each a couple of times in order to knock them down. The other strings attached to Puppet Ganon's arms may get in the way of aptly using the Boomerang, so be patient throughout this process. Once the tail is down, Link must target the crystal orb on the tail with a light arrow. After a successful shot to the orb, the puppet will fly upwards, and will be completely stringed once again. The process will need to be repeated a two more times before this phase is finished. After the Puppet Ganon fight is finished, the puppet will rise to the top of the room and then returns to the ground in the second phase as a spider.

Puppet Ganon has a few means of attacking Link. First, Puppet Ganon has a remarkable reach and can punch Link no matter the distance they are from each other. Puppet Ganon will also release some Keese to distract Link while he is trying to attack its tail. These Keese can be valuable, as they will often drop magic to refill Link's ability to shot Light Arrows. Midway through the fight, Puppet Ganon can also return to the top of the room and reattach the currently severed threads, restarting some of the fight over.

Link looking at the reflection of Puppet Ganon in the water

Now taking on the shape of a spider, Puppet Ganon rises above the battle field to the top of the room. This stage of the fight is by far the easiest for Link to fight. Link must now use the water on the ground to see where the large puppet is going to land, as Puppet Ganon's reflection is clearly visible on it. With Puppet Ganon spinning rapidly above him, Link must seek out the spaces between the large puppet's long legs and avoid being hit by them when Puppet Ganon lands. Before Puppet Ganon lands it will stop spinning at the top of the room. When this occurs, Link must quickly find the crystal orb located on one of its legs. He must then run over to an open space in-between that leg and the leg next to it.

Once Puppet Ganon lands on the ground Link can shoot a Light Arrow at the crystal orb, which will cause the spider to fly back up to the top of the room. Once Link lands two more arrow hits successfully, Puppet Ganon creates a puff of smoke and dashes out in a new snake like form.

There are only two ways that the Spider Form chooses to attack Link. The first is obvious, which is by hitting Link when the spider falls from the top of the room. This can be dodged by using the spider's reflection in the water to see where it will fall before it does, and then run to an empty space between legs to avoid contact. The second is an attack the first form uses, which is sending down a few Keese to distract Link. They can easily be taken care of with a few hits from the Master Sword before returning to Puppet Ganon.

Link and Moldorm before the fight begins

Puppet Ganon's final formation is by far the most difficult. This form looks much like a Moldorm from other Zelda games, and it also acts like it as well. This form will dart around the room quickly, often charging right into Link. There is no way to completely avoid taking damage in this phase, and Link will often get hit before he even notices the enemy coming after him.

There are a few ways to tackle this fight. Link can either use the sword or bombs, or another valid weapon, to hit the head of Puppet Ganon. This will momentarily stop it, which might give enough time to shoot a Light Arrow at the tail in order to do some damage.

Link aiming at the crystal orb on Moldorm's tail

This is very risky, however, as the window is very brief and it gives Puppet Ganon and opportunity to do heavy damage. A safer approach is to stand near one of the walls while it slithers around. Link can then take out the arrows and line up a shot to hit the orb as best he can. This will likely take many tries, as it requires hitting a fast and moving target. If Link runs out of magic, make sure to defeat the Keese that fly down every now and then to obtain more. After each hit the snake will increase its speed, moving quite rapidly by the time it has been hit twice. After Link has hit the orb three times Puppet Ganon will explode, ending the battle for good.