From Zelda Dungeon Wiki
Jump to navigation Jump to search
Want an adless experience? Log in or Create an account.
Bazz 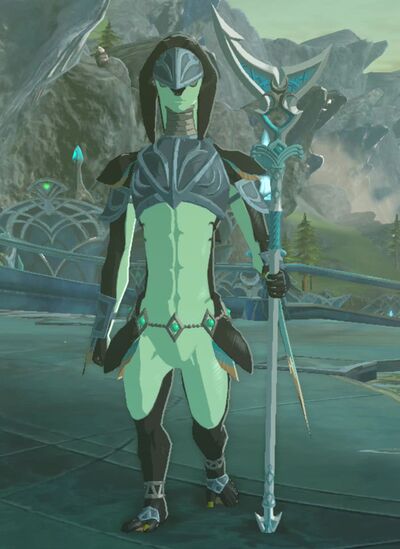 Bazz is a character in Breath of the Wild.

Bazz is a Zora guard who lives in Zora's Domain. He can be seen patrolling the domain with his Silverscale Spear. As a child Zora, he was trained in the art of the Blade by Link, and after 100 years, he became the captain of the Zora's Domain guard.[1]

When Link first arrives at Zora's Domain, Bazz doesn't immediately recognize him. While he knows he is Hylian, he thinks he does look familiar.[2][3] Eventually he remembers that it is Link and asks him what the password if the Big Bad Bazz Brigade is.[4] After Link answers Zora, Bazz confirms that it is Master Link, but he wonders what Link has been doing for the last 100 years.[5][6] Although after Link tells him he has been sleeping, he wonders how somebody could sleep for that long.[7]

Bazz serves as a guide for Zora's Domain and will help Link.[8] He mentions that King Dorephan is the father of Mipha and Sidon. Although Bazz is a bit concerned when Link doesn't remember who Mipha is.[9][10] She mentions that she was the beloved Princess of the Zora, but fell in battle 100 years ago to Calamity Ganon. Bazz will encourage Link to visit King Dorephan to talk about Mipha.