From Zelda Dungeon Wiki
Jump to navigation Jump to search
Want an adless experience? Log in or Create an account.
Laflat 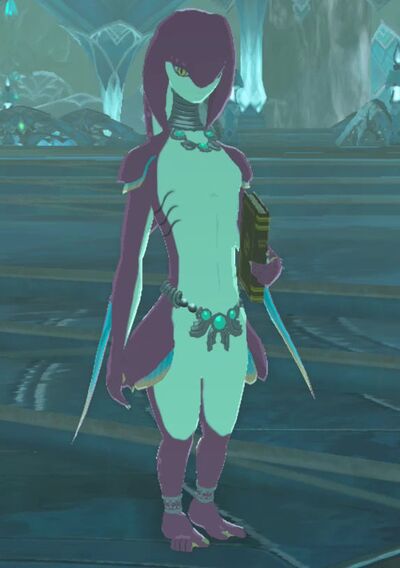 Laflat is a character in Breath of the Wild.

Laflet is a Zora who resides in Zora's Domain. She spends her time staring out towards Ploymus Mountain, as she is worried about the Red-Maned Lynel that can be found patrolling the area. Laflat mentions that there is a fool somewhere in Zora's Domain who encourages people to climb up to Shatterback Point at the top of Ploymus Mountain and jump off into the East Reservoir Lake. She thinks this is incredibly reckless as not only is it a dangerous jump, but just getting past the Lynel itself can be very dangerous.[1]

When Link speaks to Laflat for the first time, she asks Link to bring him a picture of the Lynel on top of Ploymus Mountain.[2][3] If Link doesn't understand why, Laflat will at first repeat herself with more clarity.[4] She eventually might even speak to Link as if he was a young child, explaining how awful the situation is.[5] Laflat wants a picture of a Lynel, so that she can show it to some of the people in Zora Domain's, in hopes of discouraging any people from risking their lives.[6] This will begin the Lynel Safari quest.

Link can easily reach Ploymus Mountain by heading just east of Zora's Domain and swimming up the waterfalls while wearing the Zora Armor. After a series of waterfalls, Link will find a Red-Maned Lynel. All he needs to do is take a picture of the lynel and doesn't necessarily need to fight it. Return to Laflat and show her the picture.[7][8][9] She initially screams in terror, but then thanks Link for finding the picture. She hopes it will keep the children away from the mountain.[10] Laflat will then award Link with the Zora Greaves, which is part of the Zora Set. These greaves were once made by a craftsmen and were given to Hylians when they visited Zora's Domain. They were sold by Laflat's father at his armor shop, before it had closed down. However, since less Hylians started coming to Zora's Domain, and Zora's themselves cannot use them, the armor shop needed to close.[11] This will complete the Lynel Safari quest.