From Zelda Dungeon Wiki
Jump to navigation Jump to search
Want an adless experience? Log in or Create an account.
Finley 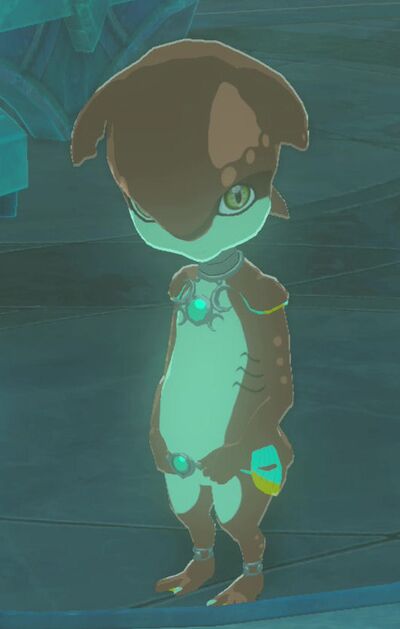 Finley is a character in Breath of the Wild.

Finley is a Zora who lives in Zora's Domain with her father Kayden and mother Kodah. Their family runs the Seabed Inn. During the daytime, Finley can be found walking around the town square and the second floor. She wakes up at 6am, and makes her way down to the Seabed Inn where she stands near the beds.

Early on, before Link has appeased the Divine Beast Vah Ruta, Finley is really down on herself. She's upset with her mother, as due to the Divine Beast, her mom won't let Finley venture off out of Zora's Domain. She wants to go to the Bank of Wishes to send a letter. Finley is very annoyed, because she thinks she's a young woman now, but because she hasn't reached her growth spurt yet, she still has the appearance of a young child.[1]

Finley has a pen pal that she wants to send her letter to. She always sends a letter in a bottle down Zora River, and always gets a reply.[2] She says that whoever replies to your message is somebody that will be yours forever. At least that's how the legend goes.[3] Finley is looking for her special prince. While she acknowledges that most of the Zora girls are head over flippers for Prince Sidon, she thinks everyone has their own special prince out there., just for them.[4]

At 4pm, Finley will walk up the large staircase, leading up to the second floor of Zora's Domain. Despite her young appearance, she speaks to Link as if she is older than him. She mentions that kids Like Link should be in bed at that time of day and that he should go to bed soon.[5][6] She dives into the small pond where she will go to sleep for the evening.[7]

After defeating the Divine Beast Vah Ruta, the sun will finally shine on Zora's Domain. This makes Finley happy and he prepares a letter to send it down the Bank of Wishes.[8][9]