From Zelda Dungeon Wiki
Jump to navigation Jump to search
Want an adless experience? Log in or Create an account.
Tobio's Hollow 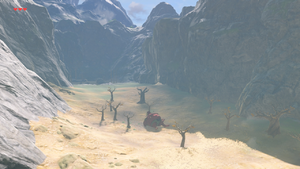 Tobio's Hollow is a location found in Breath of the Wild.

The Tobio's Hollow is a low elevation area, located directly south of the Dueling Peaks. At the north end of the hollow is a bottomless bog. There is a pinwheel in this area and if Link shoots the three balloons, a Korok will appear. On one of the large rocks in the bog, there is a triangular rock pattern with one missing rock. The missing rock can be found to the southeast, on the other side of the water. Link can knock a tree down to create a ramp, so that he can carry the rock over to complete the formation. Also in this area, there are some Ironshrooms growing, as well as some Rushrooms on the walls.

The main attraction in this area is the giant Red Hinox that can be found sleeping in the center of the region. It carries a Knight's Broadsword, Knight's Halberd, and Knight's Bow around its neck. On the higher ledge to the west there are several inactive Guardians, as well as a Decayed Guardian.

The south end of the Hollow leads underneath a large rock, eventually leading up into the Keelay Plain. The underside of this rock has a series of flowers that Link can collect to find another Korok. 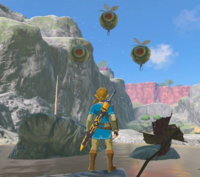 Stand near the orange pinwheel to activate an archery challenge. 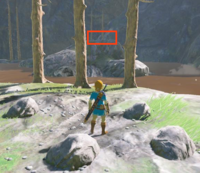 Complete the rock triangle on the island in the tar pit. Knock down a tree to make a bridge.

Complete the rock triangle on the island in the middle of the tar pit. Multiple solutions exist such as Cryonis, but making a tree bridge is the easiest. 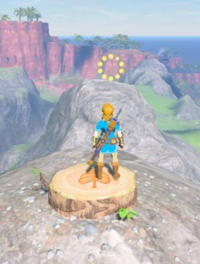 The seed platform is visible to the north-northwest. Glide to the ring for the seed.

At the top of the nearby hill to the north-northwest, is a seed platform. Trigger it and glide easily the circle for this seed.