From Zelda Dungeon Wiki
Jump to navigation Jump to search
Want an adless experience? Log in or Create an account.
South Nabi Lake 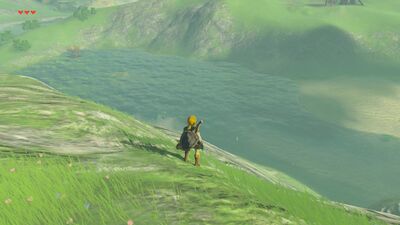 The South Nabi Lake is a location found in Breath of the Wild.

Located in the Dueling Peaks region, it can be found just northwest of the Dueling Peaks Tower. It is a small lake situated just north of Squabble River and located just south of the much larger Nabi Lake, which connects with the Hylia River. Between the Nabi Lake and South Nabi Lake, there are a number of small puddles and the area is a lowland. This seems to indicate that in times of heavy rain and flooding, the lakes would become one continuous body of water.

At the south end of the lake, there is a wooden dock with a nearby Raft. When using a Korok Leaf, Link can use the raft to reach the small island in the center of the lake, which has a small rock on it. Underneath this rock, Link will find a Korok.

Despite its rather small size, there is quite a variety of wildlife living within the South Nabi Lake. In the water, there are Hyrule Bass, Mighty Carp, Staminoka Bass, and Armored Carp. In the area around the water, Link will find Hot-Footed Frogs, Tireless Frogs, and Sneaky River Snails. Insects and small birds can be found around the lake, including Restless Crickets and Blue Sparrows. There is even a Mountain Goat, located in the area.

While there are some enemy ChuChu nearby, at nighttime Link will encounter some Stalkoblins. However, there are two Bokoblin camps adjacent to the South Navi Lake. Just to the southeast there is a large skull with several Bokoblin and Keese found inside. To the east on the higher plateau, Link will find some Red and Blue Bokoblin.

On the small island, lift the rock.

Jump all three fences in a row. This can also be done with the Master Cycle Zero using the Zero Jump.

Ride a horse to this location (probably pick one up from the Wetland Stables and ride south) or summon the Master Cycle Zero, and then jump all three fences in a row.