From Zelda Dungeon Wiki
Jump to navigation Jump to search
Want an adless experience? Log in or Create an account.
Martha's Landing 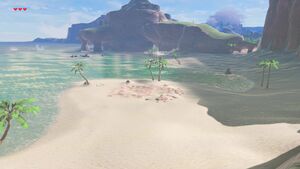 Martha's Landing is a location found in Breath of the Wild.

Martha's Landing is a coastline location, found just east of the Komo Shoreline along the Faron Sea. The road the crosses the Sarjon Bridge and passes the Sarjon Woods splits off into two and if the southern pathway is taken, it leads directly to Martha's Landing. Just east of the end of the path, there is a treasure chest in the ground that contains five Fire Arrows.

At the west side of the area, there are four treasure chests found underwater near some small rocks. Use Magnesis to bring them up to collect a Silver Bow, Sapphire gem, Silver Rupee, and a Soldier's Spear. There is also a Knight's Claymore sticking out from one of the larger rocks.

Surrounding the rocks are some Blue Lizalfos and there are also some Water Octoroks in the distance. Along the beach there are some Bokoblin riders including some Blue Bokoblin, as well as the more dangerous Black Bokoblin. At the north end of the beach, there are some Treasure Octoroks that disguise themselves as treasure on the beach, but will come alive when Link draws near.

On the east side of the water, there is a Stone Talus that will come to life when Link draws near. There is also a nearby Korok that can be found by completing the circle of rocks. Another Korok Seed can be collected under a small rock on the higher ledge east of the Stone Talus. 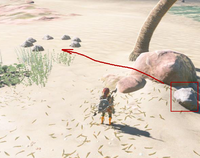