From Zelda Dungeon Wiki
Jump to navigation Jump to search
Want an adless experience? Log in or Create an account.
Super Smash Bros. 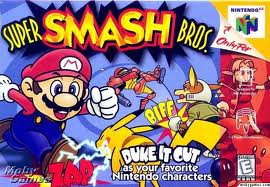 Super Smash Bros. (often shortened to "SSB" or "SSB64") is a fighting game made by Nintendo for the Nintendo 64. The game features famous Nintendo characters such as Mario and Link. It offers several single-player modes and one multiplayer mode. Its sequel is Super Smash Bros. Melee.

Link was the only The Legend of Zelda series character to appear in Super Smash Bros., and the only Zelda level was Hyrule Castle.

The only Legend of Zelda representative in this first game. Link can be very hard to approach because of his ranged projectile attacks. However, he is not the best character (being 11th/12th in the tier list) because he is slow and sluggish. His matchups with the other characters are quite balanced, but some are very low. He is playable from the very start. In the Character Select menu in VS mode, Link can change into his Goron Tunic, Zora Tunic, and a Purple Tunic by pressing the C buttons. These are cosmetic-only changes.

Mario
Nintendo's iconic mascot. Mario is considered the most balanced character in Super Smash Bros., because his pros outweigh his cons. His matchups with the other characters are very balanced too. He is playable from the very start.

Samus Aran
The Metroid-killing, bounty hunter represents the Metroid series in the game. She is a heavy and floaty character with a lot of ending lag, meaning she does not have fast combos. Samus players tend to seek out strategies/predictable moves and use those to their advantage. Her matchups are not the best and she is last in the tier list. She is playable from the very start.

Fox McCloud
Star Fox's Leader is in the game representing the Star Fox series. He is considered one of the best characters in the game; having the highest speed, great combos but being rather weak in his attacks. His matchups are good and he is 2nd in the tier list. He is playable from the very start.

Donkey Kong
DK Island's most known resident is representing his own series. He is the heaviest character in the game, but is very powerful and has an infamous grab move. Because of his slow nature, DK is very easy to combo and great for practicing them on. He is in the middle of the tier list, but has bad matchups with the characters. He is playable from the start of the game.

Kirby
Dreamland's Hero is in the game representing his own series. He has multiple jumps ― which is very good for recovering ― but he is so very light and floaty, so it is easy to knock him back. This easy knockback, however, makes it hard to combo Kirby. His main special attack makes it very difficult to get a strategy on him. All of this combined makes Kirby 3rd on the tier list. He is playable from the start.

Yoshi
Mario's most useful dino friend is in the game representing the Yoshi series. He has the most powerful down aerial move in the game and has a well-known double jump that is brilliant for dodging high attacks (disregarding Pikachu's Down Special). His grab is horrible and bad shield finishing moves. All of this makes Yoshi sit right in the center of the tier list. He is playable from the start.

Pikachu
The world's most known Pokémon is a representation of the Pokémon series. He is seen as the best character in the game with his fast speed, powerful attacks and great combos, making him top of the tier list. Pikachu's down special move is one of the most powerful in the game and is used by spammers so often that the move has become infamous. He is playable from the start.

Luigi (Unlockable)
Mario's green-clad brother is the second character from the Mario series. He is similar to his brother with his entire moveset, however, he is seen as a lesser clone to Mario. Despite this, his Super Jump Punch is much more deadly and he can jump higher than Mario. He is tied with Link for the 10th spot on the most recent Tier List revision and he must be unlocked to play. You can unlock him by completing Break the Targets with all 8 original characters and then beating Luigi in a fight.

Ness (Unlockable)
The PSI/PK user is the only one to represent the Mother series (Earthbound in particular, as it was the only one to be released internationally). He can use several magic based attacks and is well known for his unique jumps. He is only 9th on the Tier List for his predictable attacks, but he does have very good combo opportunities because he can Double Jump Cancel. He is an unlockable character and you must complete 1-Player mode with 3 lives without dying then beat Ness in a match.

Captain Falcon (Unlockable)
The well-renowned, Blue Falcon driver and bounty hunter is in the game to represent the F-Zero series. He is a pretty balanced character as he is quick and has powerful moves (one being the famous Falcon Punch), but he is quite heavy and a quick faller. He is 4th on the Tier list, making him the highest ranking unlockable character. To unlock the racer, you must complete 1 Player mode in under 20 minutes with no continues, then defeating him in a match.

Jigglypuff (Unlockable)
Some wonder why Jigglypuff is the second Pokémon rep in the game, but it is all because it was the second most popular Pokémon of the time. It is very floaty and light which makes Jigglypuff susceptible to throws and strong attacks, though some players can use this floatiness to their advantage. Because it is so easy to KO Jigglypuff, it is only 8th on the Tier List. Since it is an unlockable character, you must simply complete 1 Player mode once and then defeat Jigglypuff.