From Zelda Dungeon Wiki
Jump to navigation Jump to search
Want an adless experience? Log in or Create an account.
Groosenator 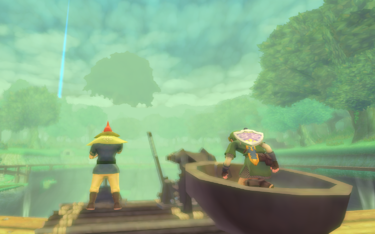 The Groosenator was a machine created by Groose in Skyward Sword. It is a huge catapult that is on rails, and it is located in the Sealed Grounds. Bombs are the main source of ammunition Groose can use these while Link is fighting below.

Groose made this invention after the first fight against The Imprisoned. While his invention seems flawless, it does not deal any damage whatsoever. All it does is stun the enemy long enough for the hero to be able to attack it. Although, at the end of the third battle it gets damaged when The Imprisoned falls. Groose gets creative; he launches Link on the head of the hideous monster.

There was another use for this invention other than throwing bombs at The Imprisoned. When the Faron Woods were flooded by Faron, and all the paths were blocked off, Groose decides to use it to launch the hero into the Woods.

Groose gives Link the option of using it to launch himself to a mini-game that is either on the Surface or in The Sky.