From Zelda Dungeon Wiki
Jump to navigation Jump to search
Want an adless experience? Log in or Create an account.
Goron Shooting Gallery 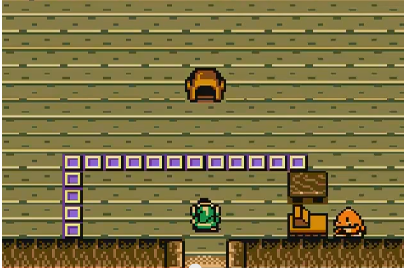 "This is Goron Gallery! Our game was a big hit in Lynna Village! Right now, we're offering Lava Juice to one player with an excellent score! Want to try? It costs 20 Rupees."

The Goron Shooting Gallery is a Mini-Game that appears in Oracle of Ages. The gallery itself is located in Labrynna within the Past, at the coordinate 2,N. The game is played very similarly to the Lynna Village Shooting Gallery, although the layout is completely different, as are the prizes.

In a Linked Game, the Goron Elder appears, and if Link tells him the correct secret, he is allowed to play with Biggoron's Sword. If Link's score is high enough, he learns another secret code which allows him to keep Biggoron's Sword and take it back to Holodrum.

The reward Link receives is dependent upon how high he scores.