From Zelda Dungeon Wiki
Jump to navigation Jump to search
Want an adless experience? Log in or Create an account.
The Dark Cloud 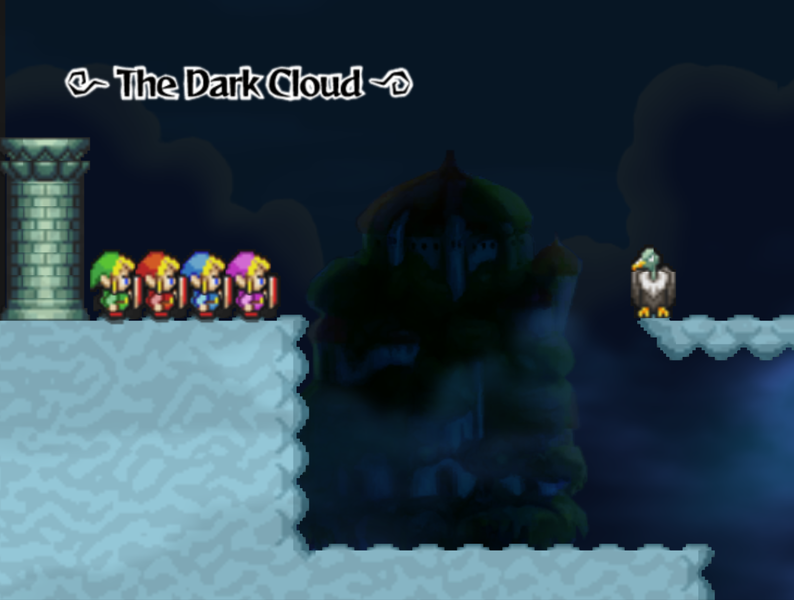 The Dark Cloud is a rather unique stage, taking place entirely in the sky. Most of the terrain is clouds, with flooring and doors being made out of them. Holes are frequent in the ground. Electric fences can also be found preventing the Links from entering areas before solving certain puzzles or defeating enemies. The Dark World also plays a minor role in this level. There are also two stone tablets with helpful information containing messages from a previous adventurer, who claims to have been in search of paradise.[1][2]

The stage is split up into two sections. First, the stage begins sidescrolling, but later on, after the Links enter a sparkling light, they are taking to a traditional top-down view. Additionally, there are two separate ways to complete the stage. Soon after beginning the top-down portion of the stage, the Links come to a split in the path, where they can take either the northern route or the eastern route.

The eastern route leads to an area filled with underground spikes that only pop out of the ground when the Links either approach or strike the ground with a powerful Hammer blow. They must navigate through the maze of underground spikes, finding the correct path through it and hitting switches to reveal the safe routes as well as Force Gems.

The alternate northern route leads to two puzzles using the Slingshot: one with electric fences that must be deactivated, and another where the correct path must be aligned to form a bridge by hitting switches. In addition, there is a room filled with sixteen different Treasure Chests containing items ranging from one Force Gem to a Heart Container to two Big Bombs.[3] This route offers much more variety in the rewards that the Links can receive. However, once the Links pass through the first Slingshot puzzle, they cannot return to go back to the eastern route. In order to obtain all of the items in the level, they would have to go through the eastern route and then turn back to go north.

Both routes realign right before the mini-boss by entering a Moon Gate on either side of a particular room. The level is the same after that.

Out of all of the equipment items used in The Dark Cloud, only the Boomerang is never required to complete the stage.

The Bow is the first item that is found, very near the beginning of the stage. It is used to activate many switches and, at the very end of the stage, it is required to spread the fire from torches lit by the Lamp to other torches in the distance. However, it is soon replaced by Bombs. The Magic Hammer is needed no matter the route that is taken during the split passageway, but it may be used for longer if the eastern route is taken. If the northern route is taken, the Hammer is replaced by the Slingshot, which could be skipped completely if the Links go east instead.

A Blue Bracelet is found in a large room containing several Treasure Chests. It is inside of a chest separate from the rest, in the northeast of the area. The chest only appears after the Links defeat three gray Sword Soldiers.

Aside from the Force Fairies available at the end of the stage as a reward based on Force Gem count, there are two hidden fairies. Both can be found inside pots. The first is in the same room that the first set of Bombs can be found, within a cave. It is behind many other pots. The second is in the eastern route when the stage splits, and the pot is located on a separate safe pathway through a maze of spikes.

Two Moon Pearls are in this stage. The first is obtained after defeating many Hardhat Beetles in an area. A Treasure Chest then appears containing the Moon Pearl, which is then used to open a Moon Gate only one screens south of there. After that, the second pearl is used if the Links go the northern route after the stage splits. It is in a room with eighteen different treasure chests and is in the biggest section, with the main sixteen chests, in the middle bottom-right chest. The Moon Gate that it opens is in the same area that the Big Key is found in, to the east.

The Dark Cloud has a total of three Heart Containers that can be used to increase the Links' health. The first is in a chest in an underground room reached via a staircase. The second is found if the Links take the eastern route when the stage splits, and it is in the northeast of the spike maze, on a safe platform. The final Heart Container is on the northern route, and it is found in a chest with many other chests filled with various items.

The Crystal Ball is an item entirely unique to The Dark Cloud. Found in the room with eighteen treasure chests in the northern route, it can give the Links a Carrot, a Red Force Gem, or a Real Bombchu.

There is only one key on the stage, and it is a Big Key. It is in a chest past the stage's second Slingshot puzzle, and it opens the northernmost Treasure Chest in the room filled with chests. The chest contains a Giant Green Force Gem, which is worth 1000 Force Gems.

The stage is not terribly enemy-heavy, but it does feature many different varieties of hostile creatures. The most common are different versions of Soldiers, including Sword Soldiers and Archers. However, the Archers and Blue Soldiers only appear during the mini-boss battle.

Vultures are the first enemies encountered, but there are only two throughout the entire stage. Keese, as usual, appear in caves. There is only one Wizzrobe featured in the stage, which will drain the Links' Force Gems, and it shares the same area as the Stalfos. However, the Stalfos only appear if the wrong combination of switches is hit in the Dark World of the same area. The Hardhat Beetles are seen nearby, materializing after the Links hit a box switch. Once they are defeated, they are awarded with a Moon Pearl. Real Bombchus, on the other hand, only appear if they are summoned from the Crystal Ball.

Aside from during the boss, there is only one Shadow Link. He can be found incessantly throwing Big Bombs in one area, forcing the Links to escape to the nearby caves for shelter.

The stage's mini-boss, which is only two pages before the boss, is a pair of Chief Soldiers and various types of Soldiers. The Chief Soldiers are colored red and blue respectively, and they are accompanied by two gray Sword Soldiers, two blue Soldiers, and four green Archers. Upon their defeat, the Links receive many Force Gems and free passage to the north of the room.

The stage's boss is Shadow Link, who is summoned by the Dark Mirror. At first, there is only one Shadow Link, but after that one is defeated, the Dark Mirror creates four more. After two of those are defeated, then another four spawn. Fortunately, Princess Zelda then appears and prevents the mirror from forming more Shadow Links, telling the Links to hurry and defeat the remaining evil shadows.[4][5] The Shadow Links will use Bombs and Spin Attacks to attack and drop Big Green and Blue Force Gems upon defeat.

When all of the Shadow Links are defeated, Zelda retrieves the Dark Mirror.[6] The Shadow Links can no longer spawn without the Dark Mirror, and Zelda creates a bridge across the clouds to the Palace of Winds.[7] She tells the Links that it is time to face Vaati, but she believes in them.[8] The Links can then destroy the Eye Barriers at the end of the stage and can finally move on to the Palace of Winds, the final stage in the game.