From Zelda Dungeon Wiki
Jump to navigation Jump to search
Want an adless experience? Log in or Create an account.
Kinstone Fusion 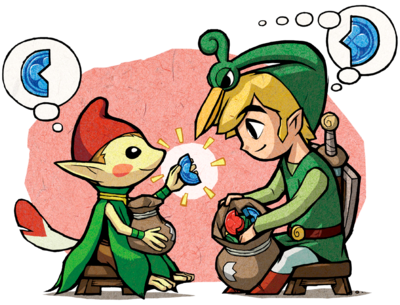 Kinstone Fusion is a skill seen in The Minish Cap. Link can collect pieces of Kinstones as he travels, and he can fuse them with another half of a Kinstone to make something appear in the game world. The other half of the Kinstone is carried by certain characters or objects within the game.

Link learns to fuse kinstones from the Hurdy-Gurdy Man in Hyrule Town, who also gives him a Kinstone Bag to store each kinstone in. When Link walks up to a character, such as a certain Hylian, Minish, or animal, a thought bubble may appear over their head. If this occurs, Link can fuse Kinstones with them by pressing 'L'. Link can also fuse Kinstones with other certain objects, such as some statues and clouds.

Fusing Kinstones will cause something good to happen in the overworld. These can include new caves opening up, staircases appearing, or new characters to appear, allowing Link to interact with them. In some occasions, a golden enemy will appear in a certain area in the overworld. Upon killing these enemies, they will drop 50 to 100 Rupees (in a small few cases it's 200, but it's a lot later on in the game) for Link to pick up.

Kinstone Fusion seems to be a common myth among the people of Hyrule. Upon fusing Kinstones with them, they will usually say something like "I wonder if something good will happen!"

Once Link completes all the Kinstone Fusions in the game, he will receive a Tingle Trophy from Tingle. 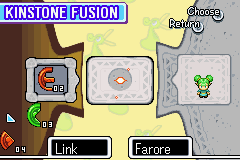 The interface shown when fusing Kinstones

Kinstone Fusion itself is a form of a simple puzzle. The character or object that Link is trading with has a certain half of a Kinstone. Link will have to try to find the opposite half of the Kinstone that fits the shape of and is the same color as the first half. Once this is done, a short cutscene will play, revealing the effect that the fusion caused.