From Zelda Dungeon Wiki
Jump to navigation Jump to search
Want an adless experience? Log in or Create an account.
Hero's Charm 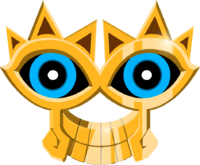 "You got the Hero's Charm! This mystical trinket gives you the ability to see the life forces of your foes! Equip it on the Quest Status screen!"

The Hero's Charm is an item in The Wind Waker. It grants Link the ability to see his enemies' health level when worn. It does not take up one of the three item slots, but instead is switched on and off by selecting it from the inventory. When locked-on to normal enemies, they acquire a small red bar either above or beside them. For bosses, it is a much larger bar with a skull on one end that appears at the bottom of the screen, not above the boss. This is the first item in the franchise to introduce the mechanic of visualizing enemy health levels. In previous games, a player would need to traditionally memorize the number of strikes against an enemy from a particular weapon before they were defeated.

In the original GameCube version of The Wind Waker, it is given to Link by Mrs. Marie after he has collected and given her 40 Joy Pendants. However, in the The Wind Waker HD for Wii U, Link can find it at the end of the Savage Labyrinth after completing its fifty-one floors of increasingly difficult enemies.