Symbols of The Legend of Zelda

The pattern on the Gate of Time features two different symbols associated with the Golden Goddesses. 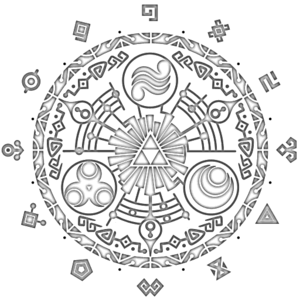 As the iconic symbol of the series, the Triforce appears prominently throughout most of the games. As the object it represents lies in the Sacred Realm which is accessed through Hyrule, and it is usually held or protected by the Hyruleans, it is generally associated with and seen in Hyrule. It is viewed by Hylians as a symbol of power and stability. During the Golden Era, it gained exceptional reverence as it was used responsibly by Hylian monarchs to create a prosperous age.

Crests of the Goddesses