From Zelda Dungeon Wiki
Jump to navigation Jump to search
Want an adless experience? Log in or Create an account.
Horse (Hyrule Warriors) 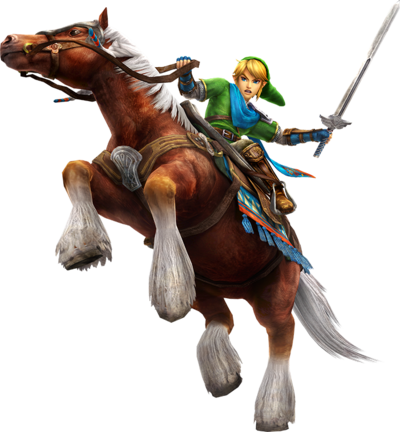 "Link's beloved steed and most faithful companion. When the gauge is full, charge ahead with a Strong Attack. You can also charge by holding

at the end of a Combo Attack."

The Horse is one of Link's weapons in Hyrule Warriors. It is part of the Master Quest Pack. All three ranks are unlocked upon installing the DLC pack. The horse weapon allows Link to ride on the back of Epona.

Epona is very versatile. She may be a bit awkward to fight bosses with, but it is not too bad. Upon Epona's back, Link can pull her places with the Hookshot, shoot his Bow and Arrows, throw his Boomerang, and use Bombs. The attack chains allow Link and Epona to fight in tandem. For example, one of the combo chains is for Epona to kick enemies up into the air while Link shoots them three times with his Bow and Arrows. For the victory pose, Link plays the Ocarina of Time to call his precious steed. They then ride off into the distance.

3ds/Switch: Unlocked in Adventure Mode by completing the challenge on grid D15? with an "A" rank as Link after using the Power Bracelet to move the Armos statue.

3ds/Switch: Unlocked on the Great Sea map in Adventure Mode by completing the challenge on grid A2? with an "A" rank as Link after using a Hyoi Pear on the seagull.

3ds/Switch: Unlocked on the Master Quest map in Adventure Mode by completing the challenge on grid E13? with an "A" rank as Link with the Horse after using the Digging Mitts on the soft earth and revealing the enemies by using the Recorder to drain the pond.