This article is about Sheik's weapon in Hyrule Warriors. For other uses, see Harp (Disambiguation).

TODO: Languages, update for Legends & Definitive Edition
Care to do so?
Harp 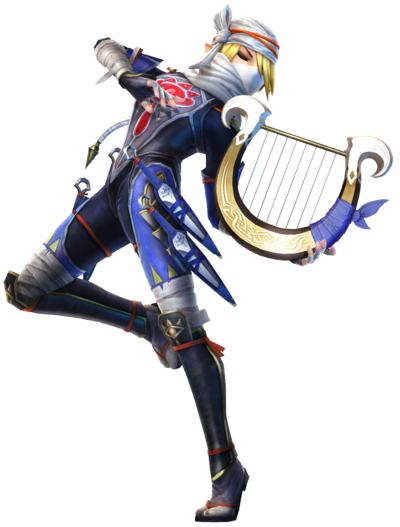 "A harp that commands magical melodies. It can be imbued with elemental affinity using Combo Attacks. Use the Strong Attack button to tap into elemental powers and cause various effects."

The Harp is Sheik's only weapon in Hyrule Warriors. Sheik starts with a Goddess's Harp when she is unlocked after completing The Sheikah Tribesman in Legend Mode.

Each of the Harp's combos use a different element:

Unlocked in Legend Mode from a Sealed Weapon found in a chest that appears after capturing Temple Face Keep in The Water Temple scenario, set in Lake Hylia.

Unlocked in Adventure Mode by completing the challenge at grid G15? with an "A" rank as Sheik after using a Bomb on the fourth-from-right space on the north wall, and revealing the enemies with a Goddess's Harp on the Goddess Butterflies.

Part of the Master Quest Pack, unlocked in the Master Quest map of Adventure Mode by completing the challenge at grid E13? with an "A" rank after using a Recorder on the lake (one space down and one space right from the top-left corner) and Digging Mitts on the patch of soft soil.

Unlocked on the Termina map in Adventure Mode by completing the challenge at grid A13? with an "A" rank as Sheik after using the Bomb on the boulder.

Unlocked on the Koholint Island map in Adventure Mode by completing the challenge at grid D2? with an "A" rank as Sheik after using Grandpa Ulrira on the Phone Booth.