From Zelda Dungeon Wiki
Jump to navigation Jump to search
Want an adless experience? Log in or Create an account.
Gauntlets 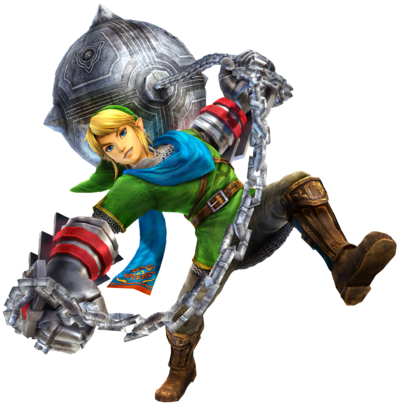 Gauntlets are one of Link's weapons in Hyrule Warriors. It is unlocked in Adventure Mode by clearing grid G-14? as Link. The Gauntlets allow Link to use the Ball and Chain item from Twilight Princess. Link swings the weapon around his head, vaporizing enemies as he goes. In addition to the Ball and Chain, he has huge gloves reminiscent of the Mole Mitts or Digging Mitts combined with the Silver Gauntlets. He can burrow underground, lift large stone pillars, and pick up enemies and jars to throw them. The gauntlets turn black with shadow when Link's shadow costume is on.

"A power-gauntlet-and-flail-combo set, perfect for devastating attacks. Pressing the Strong Attack button allows you to pick up and throw enemies."

These are unlocked on Adventure Map G-14 in all versions of the game.

On the Wii U, these are unlocked on the Adventure Map by completing the challenge at grid C12? with an "A" rank after using a Candle on the lower-left tree.

On the Wii U, these are unlocked in Adventure Mode by completing the challenge at grid B14? as Link with the Gauntlets with an "A" rank after using a Candle on the tree blocking the path and revealing the enemies using a Goddess's Harp on the Goddess Butterflies.

In Legends and Definitive Edition, these are unlocked at Master Quest A-11.

These are only obtainable in Legends and Definitive Edition on Twilight Map square G-5.

These are only obtainable in Legends and Definitive Edition on Koholint Island Map square A-14. They add the element of

Fire to the weapon in addition to Lightning.

On the Wii U, the 8-Bit Power Bracelet is unlocked in Adventure Mode by getting an "A" rank at grid C3 ?of the Twilight Map. You must use the Lantern to reveal the enemies then use a bomb on the boulder in order to unlock the "A" rank challenge. The Challenge requires you to use Link with the Gauntlets weapon. It has the exact same stats as the Power Gloves.

On the Switch, the 8-Bit Power Bracelet can be used in place of the Burning Gloves by turning on the 8-Bit Weapons option in the settings.