From Zelda Dungeon Wiki
Jump to navigation Jump to search
Want an adless experience? Log in or Create an account.
Demon Blade 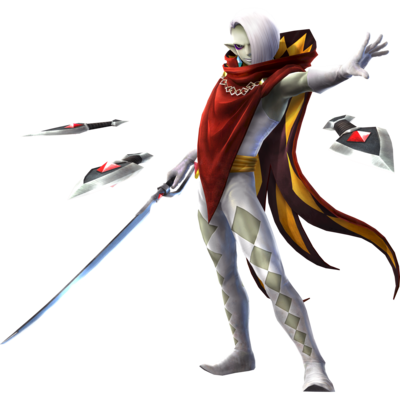 The Demon Blade is Ghirahim's only weapon in Hyrule Warriors. Ghiarhim starts with a Demon Tribe Sword when he is unlocked after completing the challenge at grid B3? in Adventure Mode. This sword is a pure-black cutlass. While Ghirahim is battling, his attack chain allows him to compulsively transform into his sword form. When he gets a Focus Spirit attack, he transitions into his darker form from his final battle in Skyward Sword. One of his combos is to call an army of Bokoblins from the depths, while another is to shoot out blades and teleport around the battlefield. His Strong Attack is to shoot a long red targeting beam from his finger. When the Strong Attack button is again pressed, he shoots a sharp projectile at his targeted foe. Then he proceeds to lick his sword. All of Ghirahim's moves are rather lengthy, but they can be shortened with a roll.

"A sword created by the demon tribe in the distant past. Press the Strong Attack button to lock on to a foe. Attack again to shower it with a barrage of dark energy!"

Unlocked in Adventure Mode by completing the challenge at grid E5? with an "A" rank after using a Power Bracelet on the top middle Armos Statue.

Unlocked in Adventure Mode by completing the challenge at grid G9? with an "A" rank after using Digging Mitts on the patch of soft soil.

Part of the Master Quest Pack, unlocked in the Master Quest map by completing the challenge at grid E10? with an "A" rank after using a Recorder on the middle gravestone in the second row from the left and Digging Mitts on the patch of soft soil.