From Zelda Dungeon Wiki
Jump to navigation Jump to search
Want an adless experience? Log in or Create an account.
Scimitars 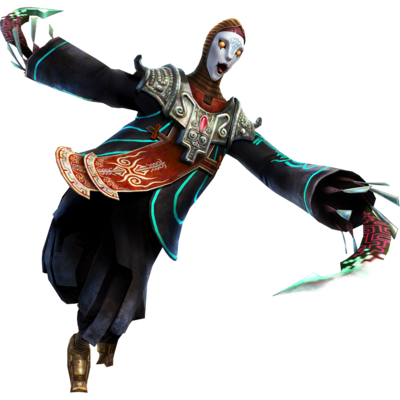 The Scimitars are Zant's only weapons in Hyrule Warriors. Zant starts with Usurper's Scimitars when he is unlocked after completing the challenge at grid F3? in Adventure Mode. His attack chains consist of things like a Zant's Hand slapping around or a large Zant Mask shooting out red orbs. His final chain causes him to turn huge like he does in Twilight Princess during his Blizzeta phase. Each attack fills up his gauge a little bit. Once it is full, he tears away his helmet and spins rapidly, slaying enemies until the gauge runs out.

"Curved blades birthed from Twilight magic. A gauge fills up with each Combo Attack you connect. Use the Strong Attack button to expend the gauge and bombard your foes with energy."

Unlocked in Adventure Mode by completing the challenge at grid E1? with an "A" rank after using an Ice Arrow on the ring of fire.

Unlocked in Adventure Mode by completing the challenge at grid G3? with an "A" rank as Zant after using a Bomb on the north wall, five spaces east of the stairs.

Unlocked on the Twilight Princess map in Adventure Mode by completing the challenge at grid H4? with an "A" rank as Zant after using the Spinner on the cog-shaped hole.