This article is about the weapon from Hyrule Warriors. For the item from Skyward Sword, see Goddess Sword. 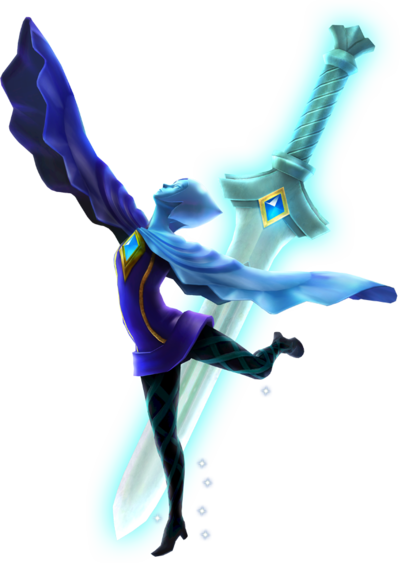 The Goddess Blade is Fi's only weapon in Hyrule Warriors. Fi starts with a Goddess Sword when she is unlocked after completing Land in the Sky in Legend Mode. She can transform into her sword just like Ghirahim does. Fi's moves consist of many references to the game Skyward Sword. For instance, one of her attack chains results in her singing and creating a flowery ring around herself, like she does when Link plays his harp. Her Special Attack, as another example, is her sticking herself (in sword form) into one of the Silent Realm spots. Another is her using the Sacred Flames.

"A sword created by the goddess in the distant past. Use the Strong Attack button to temporarily imbue yourself with the power of light."

Unlocked in Adventure Mode by completing the challenge at grid C5? with an "A" rank.

Unlocked in Adventure Mode by completing the challenge at grid A14? as Fi with an "A" rank after using a Bomb on the wall, seventh square from the left.