From Zelda Dungeon Wiki
Jump to navigation Jump to search
Want an adless experience? Log in or Create an account.
Shackle 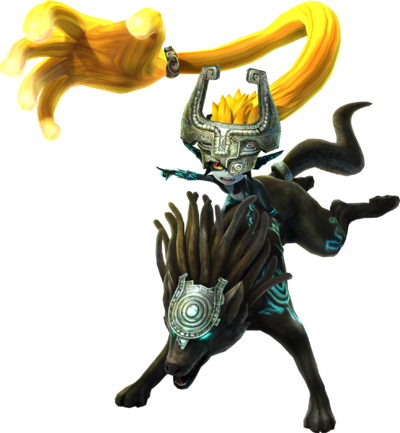 In Hyrule Warriors, Midna uses the Shackle to control shadow wolves to help her fight enemies. Midna starts with a Cursed Shackle when she is unlocked after completing Twilight Field.

Midna is extremely useful for attacking large groups of enemies, as she uses her magic to spawn several twilight wolves. She can grasp enemies with her hair with her strong attack. This temporarily charges her darkness power. Like all warriors who excel in darkness, each attack on a single enemy increases her attack power. When her darkness gauge is full, she is already at her maximum strength. This can be very useful in fighting enemies one on one, such as in Adventure Map quizzes.

"A cursed shackle, originating from the Twilight Realm. Use the Strong Attack button to grab and hurl an enemy with your hair. You'll also be temporarily imbued with the power of darkness."

Unlocked in Adventure Mode by completing the challenge at grid F9? with an "A" rank, after using a Candle on the lower-right green tree.

Unlocked in Adventure Mode by completing the challenge at grid A15? with an "A" rank as Midna, after using the Digging Mitts on the patch of soft soil.