From Zelda Dungeon Wiki
Jump to navigation Jump to search
Want an adless experience? Log in or Create an account.
Zora Scale 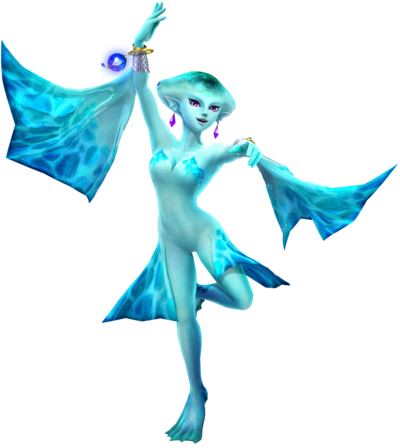 The Zora Scale is Ruto's only weapon in Hyrule Warriors. Ruto starts with a Silver Scale when she is unlocked after completing the challenge at Grid D10? in Adventure Mode.

When Ruto sprints, she looks like she is swimming. Her combos (which include making an orb of water, along with jumping around like a fish) slowly build up a gauge underneath her Special Attack gauge. Pressing the strong attack button when the gauge is full makes Ruto send a barrage of powerful waves until the meter runs out, followed by one large wave. The number of waves that she sends depends on how full the gauge is.

"An amulet of the Zora people, imbued with the power of water. Each Combo Attack fills a water gauge. Press the Strong Attack button to expend the water for a powerful distance attack!"

Unlocked in Adventure Mode by completing the challenge at grid D15? with an "A" rank after using the Power Bracelet on the Armos Statue on the right.

Unlocked in Adventure Mode by completing the challenge at grid C16? with an "A" rank as Ruto after using the Ladder and the east-most boards and using the Goddess's Harp on the Goddess Butterflies to reveal the hidden enemies.